A murder accused, who attempted to flee during the fire that destroyed the Georgetown Prison, was recaptured  in the vicinity of the maximum security prison, a police spokesman said Monday. 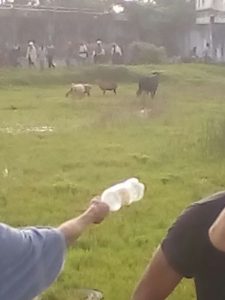 Animals seen in the area where the more than 1,000 prisoners were relocated following Sunday’s prison.

He escaped while being transported with other prisoners Sunday night and was recaptured at about 1:50 Monday morning, the police spokesman said. “It was good that we were able to nab him early.”

Ramlakhan said Collins was not among the five who escaped shortly after the fire started at the prison Sunday afternoon.  He said so far, there is no further word of any other escapees.

So far, authorities have been able to name only two of the five escapees. They are Royden Williams, who was sentenced to death for the Bartica massacre, and Uree Varswyck who has been committed to stand trial for a robbery-murder.

The more than 1,000 other inmates have been transported to highly fenced plot of land next to the Lusignan Prison where they slept among animals. Sources said they have not yet received food and water, and the promised toilet facilities were yet to be established.

In all, two prisoners were shot while attempting to escape and eight prison wardens were either chopped or shot.

Authorities said five prisoners set fire to the prison in an attempt to distract prison and police guards as they fled the maximum security jail.

Public Security Minister, Khemraj Ramjattan said in an effort to alleviate the situation at Lusignan, 300 of the inmates would be sent to other prisons and those who were convicted for non-violent offences and are on good

behaviour would be released early. He also said authorities would explore how to deal with the more than 500 remanded prisoners, many of whom cannot afford to lodge cash bail to secure their pre-trial liberty.

Ramjattan said the Camp Street prison would be rehabilitated at least to house remanded prisoners due to the fact that it is the best location from which to shuttle prisoners to the several courts in Georgetown and East Bank and East Coast Demerara.