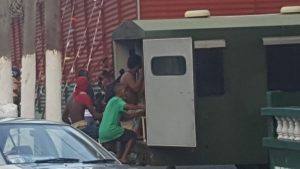 Rescued prisoners about to be taken away to another jail.

A prison officer succumbed to a gunshot injury while receiving emergency treatment at the Georgetown Public Hospital.

He has been identified as Odinga Wickham.

Nine other persons were injured during Sunday afternoon’s fiery unrest that destroyed the maximum Georgetown Prison, officials said. There are no immediate reports of deaths.

Wickham was one of the prison wardens who  were rushed to theatre for emergency surgery. Another of the prison officers critically injured has been identified as Hubert Trim.

Lewis and Public Health Minister, Volda Lawrence said efforts were being made to ensure the hospital has all the required medical supplies. Doctors, nurses and other health workers were being summoned to report to the hospital.

Lawrence said the hospital has not been overwhelmed but a contingency plan is being put in place. “We aren’t overwhelmed and we won’t be,” said Lewis. He added that an alternative treatment facility has been set up.

The Civil Defence Commission has been activated. The National Security Council was Sunday night due to meet in emergency session at State House.

All the buildings, except the recently constructed concrete block, were destroyed in the raging fire that was being aided by a strong north easterly breeze.

Sources said the the unrest began when an inmate, fed uo of being remanded for a lengthy period; attacked a female prison warden. She begged for her life.

Two male prisoners were chopped during the early period of the fracas.

Others then began banging doors and calling for the jail to be burnt.

After heavily armed soldiers and police facilitated the exit of numerous prisoners and taken across to the Prison Officers Club as a holding area, a number of them opened bottles of liquor such as vodka, soaked their jerseys, lit and tossed them into the club setting that building ablaze.