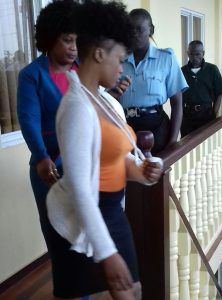 Twenty-seven year old Tecona Welcome of 39 Austin Street, Campbellville made another appearance in the Sparendaam Magistrate’s Court , this time charged with causing death by dangerous driving.

Welcome appeared before Magistrate Alisha George who read the indictable charge that on June 24, 2017 at Liliendaal, East Coast Demerara she drove motor car PSS 7195 in a dangerous manner causing the death of pharmacist Debra Pompey.

The care driver was represented by Attorney-at-Law Nigel Anthony who told the court that his client is at present on bail for driving under the influence of alcohol.

Anthony added that she is still grieving since the life that was lost is a friend of hers and as such should be sent on bail given the fact she would return for her trial.

On the other hand, Police Prosecutor David Goodridge objected to bail based on the fact that Welcome was instructed by police to report to the Sparendaam Police Station after bail was posted for her driving under the influence of alcohol charge but failed to do so.

Prosecutor Goodridge noted that based on that fact if granted bail she might not return for her trial and as such bail should be refused.

Magistrate Alisha George in turn granted bail to Tecona Welcome in the sum of GYD$500,000 under the condition that she lodges her passport and report to the Sparendaam Magistrate’s Court every second Friday of every month.