WPA not worried about outspoken criticism of coalition 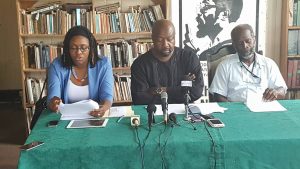 The Working People’s Alliance (WPA) on Tuesday dismissed suggestions that its outspoken posture on relations in the governing coalition could poison the environment going into talks with the rest of A Partnership for National Unity (APNU).

Executive member, Tacuma Ogunseye argued that his party must be speak out frankly, privately and publicly if anything tangible is to be achieved from next month’s talks in the interest of educating and informing the masses. Ogunseye said his party is unapologetic about that stance. “We believe that whether or not the other side in the discourse is offended by that; for us it is not a big problem for us. We politically are aimed at correcting and they would be petty… and I don’t think that should be a major issue to influence the environment of the talks,” he said.

Already President David Granger has said he does not conduct political affairs in the media and in that manner. While WPA Executive Member, Dr. David Hinds argued the need for open governance, he declined to provide details of  his party’s demands in the July 22, 2017 talks.  He said one them is the need to reactivate the APNU Councils to ensure there is consultation and influence policy.

Contrary to the Guyanese leader, WPA Executive members insisted that there is sufficient evidence to prove that their party has been sidelined because there has been no consultation in the APNU since the coalition with the Alliance For Change (AFC) came to power two years ago. “If the APNU leadership Council hasn’t met for nearly two years, how would the WPA effectively play this role in the government and the coalition? You don’t have to be a political scientist to work that out,” he said.

Hinds said the planned meeting is not to determine whether the WPA would remain in the coalition, but to “reset the relationship” to ensure there is “consultation and meaningful involvement in the making of policy.”

They hoped that a road-map would emerge out of the meeting in another few weeks, in keeping with expectations by Guyanese that the WPA would remain the voice of integrity without any baggage of rigged elections. Hinds believed that the rest of the government has embarked on a mission of “containment” in contrast to the historical radical posture of his party. “We are saying that there is a place for radicalism. There is a place for the struggle for a better world and another world,” he said.

That party further charged that there was no justification for the removal of Dr. Rupert Roopnaraine for poor performance because there have been several new initiatives and the recent National Grade Six Assessment 2017 results show major achievements. “It’s now open knowledge that the minister was removed from that position for lack of performance…we are of the view that an injustice was done to Dr. Roopnaraine…when you look at what has been done at the ministry, one can hardly call that poor performance,” said Hinds.

Hinds said the WPA does not want Roopnaraine to return to the Education Ministry, but the President should acknowledge publicly that the former minister perform creditably and “to say he may have acted prematurely in removing Dr. Roopnaraine from that position” and that he was not given a chance to carry out his full mandate.

Roopnaraine, according to Hinds, has not been assigned an office and staff. He is currently abroad for  personal reasons. At the upcoming APNU meeting, Hinds said the APNU would be asked to provide clear guidelines and expectations for Roopnaraine’s new portfolio as Minister of the Public Service and what role the WPA is expected to play in making that ministry a success.

The WPA declined to respond to views expressed that then Junior Minister of Education, Culture, Youth and Sport,  Nicolette Henry should be credited for this year’s performance at the National Grade Six Assessment.