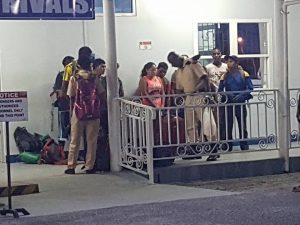 A number of the suspected illegal miners shortly after their arrival at the Eugene F. Correia (Ogle) International Airport on Sunday.

The 20 persons- mainly residents from the Amerindian village of Chenapau- who were earlier this week arrested for allegedly illegally mining at the Kaieteur National Park were released from police custody after they were charged with violating the Mining Act, authorities said Tuesday.

Commissioner of the Guyana Geology and Mines Commission (GGMC), Newell Dennison told Demerara Waves Online News that they have been charged under the Mining Act. “GGMC has responded as best as it could in the circumstances by laying charges where we taught it was possible to do so,” he said.

Head of the Criminal Investigations Department of the Guyana Police Force, Superintendent Wendell Blanhum said the detainees were all released without bail.

They are expected to appear at the Mahdia Magistrates’ Court in July to answer the charges. Sources said there are variety of charges that could be slapped on the miners. 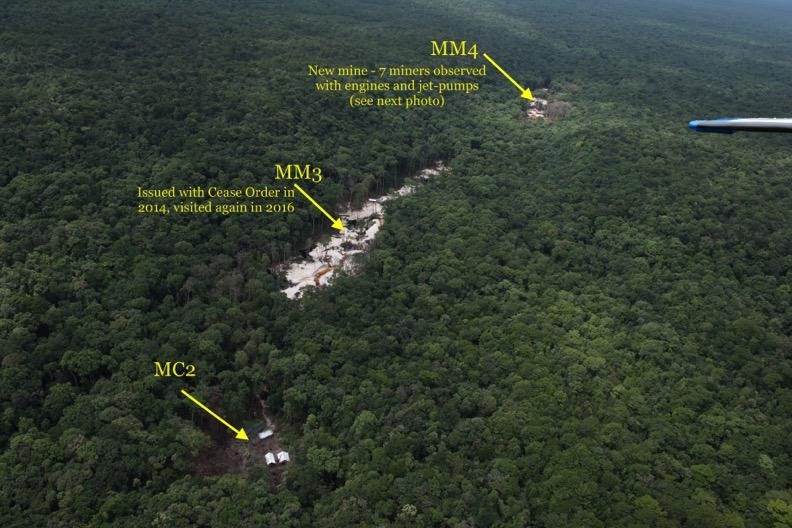 The regulations made under the Mining Act 2005, Part XXVII Section 251 (1) (a), “No person shall conduct mining and quarrying activities in the following areas- (b) In specified nature reserves and parks where resource extraction is prohibited; (c) In buffer areas without express approval of the Commission and the notification of parties likely to be affected by the activity.”

An operation, ordered by President David Granger, saw police, soldiers and GGMC officials swooping down on the miners, arresting and transporting them to Georgetown by aircraft.

Authorities alleged that the persons were mining in the Kaieteur National Park in violation of several laws including the Mining Act and the Protected Areas Act 2011. 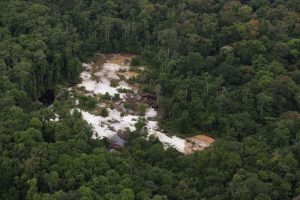 Mining at the Kaieteur National Park

Photographs of what appears to be official receipts from the GGMC have since surfaced, showing that thousands of dollars have been paid by one George De Abreu for application for mining claims, and the renewal of mining claims.

However, high-level GGMC sources said being in possession of receipts do not equate to claim licenses. The source explained that the process entails the prospective miner identifying an area, paying for the claim, an on-the-ground inspection of the area, and an analysis of all the factors including possible conflicts with other claims, laws and regulations. After the analysis, the prospective miner may be granted approval, refused or asked to make the necessary amendments.