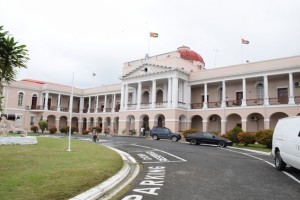 The Georgetown Public Hospital Corporation (GPHC) is unable to give a definitive position on why many of its Annual Finance Statements are not being filed—months after they are legally required according to the Public Corporations Act—and further is unable to say whether monies it was supposed to return to the treasury were in fact returned.

This situation was only compounded further when GPHC Finance Director, Ronald Charles, appeared before the Parliamentary Public Accounts Committee on Monday but denied having responsibility for the finances at the Hospital.

Charles was at the time being grilled by PAC Chairman, Peoples Progressive Party Civic (PPP/C) frontbencher, Irfaan Ali and former junior Finance Minister, Bishop Juan Edghill and was unable to provide any documentation to corroborate whether monies allocated in 2015 and 2016 and not spent were in fact returned to the treasury.

Chief Executive Officer (CEO) of GPHC, Johnson assured the House this was in fact done but the Finance Director was unable to corroborate the CEO’s position.

This led PAC Chairman to question, “Are you the Finance Director, sir?”

Charles’ response, “not for the Finance per se”

Having discovered that a lack of filing financial statements by GPHC could have led to money being unlawfully held back, Ali had minutes earlier asked the CEO, “at the end of 2015 and 2016 how much resources did you keep in your accounts?”

According to CEO Johnson, “all funds were returned to the government of Guyana sir,” but when asked to provide evidence in support of his statement, he was unable.

He was granted leeway until Tuesday by the Chair to provide the documentation but Bishop Edghill at this point objected and questioned how exactly the financial books are being ‘closed’ or ‘re-opened’ at the beginning and end of a financial year with regards closing/opening balances.

Even as the former Junior Finance Minister made his observation, the PAC Chairman discovered that the CEO’s statement was in fact misleading to the Committee, according to PAC records.

“CEO just before you answer that question, based on our records you are misleading the PAC,” Ali objected.
He pointed out that monies allocated to GPHC for 2016 that went unspent were never in fact returned at the end of the year—as required by law.

Johnson responding saying “could I ask the Director of Finance to answer the question please” but Charles instead offered clarification as best as he was aware.

Committee Chairman told the Finance Director that the CEO assured the money had been paid back to the Consolidated Fund but he sought to offer a clarification.

He told the Committee that all funds related to the financial year 2015, “they would have been sorted out.”
The Finance Director continued, “…with the 2016 now, as far as I am aware….as far as I am aware those, there is still some money that is outstanding I need to clarify that, I will provide the position paper.”

An incensed PAC Chairman questioned what exactly was transpiring and turned to CEO Johnson.

The Committee was told by Johnson that on assuming office it was discovered that previous finance director was no longer there and as such Charles was appointed Finance Director but “the last Board brought back Mr. (name given) as director and therefore, Mr Charles, was shifted to procurement.”

The testy session was brought to a premature end by PAC Chairman, Ali since the two technical officers from GPHC were unprepared to be grilled by the Committee.