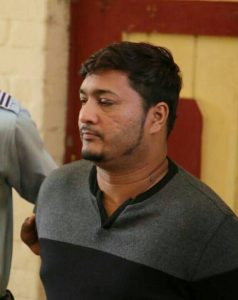 A widely suspected Trinidadian con artist was Tuesday jailed after he was convicted for forgery and immigration breaches.

Daniel Ali will be spending the next two years in the Georgetown Prisons after he pleaded guilty to the charges of over staying his time and forging two legal documents.

The charges allege that between January 3, 2017 and May 19, 2017 in Georgetown he conspired with persons to forge one Guyana driver’s license in the name of one Selall Madia knowing that it was false.

The second charge alleged that on March 23,2017 at the Central Immigration and Passport Office he made a false statement which is to say he signed a declaration saying he was Selall Madia knowing it was false.

The third charge stated that June 23,2014 and May 20, 2017 he failed to comply with the regulations and overstayed his time in Guyana.

Ali told Chief Magistrate McLennan he is sorry for his actions.  He was nevertheless still sentenced to two years with a fine of GYD$30,000.

He has been fingered in several scams including visa fraud, illegal property acquisition and the rental of premises purportedly for a number of businesses.