A total of 3,274 persons and hundreds of farms have been affected in the recent flash flooding in Regions Seven (Cuyuni-Mazaruni) and Eight (Potaro-Siparuni)  in as much as 25 feet of water in some places—a disaster that has already cost the state $8M in relief efforts.

That was the grim report provided today (May 23, 2017) by Deputy Director of the Civil Defense Commission (CDC), Major Kester Craig. 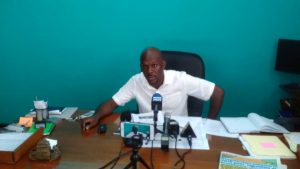 So far $2.8M have been spent on the flights alone into the affected areas, according to the CDC Deputy Director.
He reported that 327 relief food hampers were distributed in Chenapau, Kaibarupai, Waipa, Sand Hill, Itabac, Kanapang. He said 209 relief cleaning hampers have been distributed to Kaibarupai, Waipa, Sand Hill, Itabac, Kanapang.

According to Major Craig, the food hampers were envisaged to cater for a small family for two weeks.

Government has spent some $4.1M on hampers, this minus the donation from corporate Guyana.

The CDC Assistant Director said that the floods, in addition to damaging private property, also affected state infrastructure and pointed to roads, schools and a health post.

According to Major Craig, the school at Itabac has since shifted and has become unstable while the health post at Kaibarupai was flooded.

He reported that a team of engineers from the Guyana Defence Force has since been flown into the area to effect repairs to the parts of road from Itabac to Kanapang which were damaged and is impassable by vehicles.

Providing an update on the impact of the flood by Region, Major Craig told media operatives that in the Potaro/Siparuni farmlands and homes in villages of Kaibarupai, Waipa, Chenapau, Itabac, Kanapang, Kopinang and Sand Hill Settlement were all flooded.

One of the hardest hit areas, according to Craig, is Kaibarupai where some 113 residents were flooded, 26 of whom had their homes completely washed away.
He said “residents of Kaibarupai were forced to evacuate uphill and construct temporary shelters.”

Chuing Mouth, Kanapang, Itabac, Kopinang, Sand Hill Settlement and Chenapau were among some of the hardest hit areas in Region eight, according to Major Craig.

According to the CDC director however, the full impact of the flooding is still being assessed.

He said all of the farms in Kako have been flooded, some by as much as 15 feet while in Quebenan 80 farms have been affected.

Farms have already started to wilt as the soil is still water logged and according to Major Craig, while there has been no outbreak of water borne diseases, there has been a reported increase in mosquitoes in Kako.

2017-05-23
Writer
Previous: Roger Moore, James Bond Star, Dies at 89
Next: You’ll be fined if you import vehicles with used tyres below the required measurement- GRA