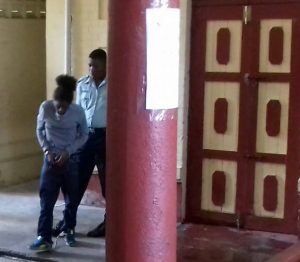 A Stabroek Market vendor was was Tuesday morning arraigned and remanded on a charge of trafficking in narcotics.

The charge against the 26-year old man is that on May 12 at Stabroek Market he had 23 grammes of marijuana for the purpose of trafficking.

The unrepresented man denied the allegation that was leveled against him.

Police Prosecutor Arwyn Moore objected to bail being granted since no special reason was given by the defendant for bail to be granted.

Moore also told the court that Alexander had allegedly robbed someone and was positively identified.

Police conducted a search on his person and  they allegedly unearthed a black plastic bag that contained leaves, seeds and stems suspected to be cannabis sativa.

He was told of the offence but remained silent.

Chief Magistrate McLennan, taking the objections into consideration, remanded Alexander until May 29, 2017.