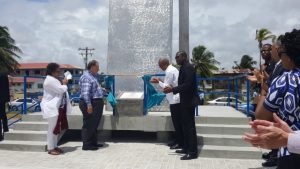 Chairman of the Ansa Mc Al Group of Companies, Dr. Norman Sabga and President David Granger who unveiled the plague to park the commissioning of the Cummings Logde Arch. Looking on are Ansa McAl’s Beverley Harper and Minister of Public Infrastructure, David Patterson.

“This arch defines the boundaries of our capital. It exemplifies private-public partnership. It epitomises the friendship between two Anglo-phone Caribbean states- Guyana and, Trinidad and Tobago-and their commitment to cooperation within the Caribbean Community,” he said.

He was speaking at the commissioning of the 85-foot tall edifice, which was funded by the Trinidad-headquartered Ansa McAl Group of Companies, near the northern entrance to Cummings Lodge, Greater Georgetown.

One year ago, Banks DIH funded a similar arch at Agricola, the southern entrance to Georgetown.

Noting that he has seen complaints on social media about the traffic disruption on Thursday, Public Infrastructure Minister David Patterson apologised for the situation that caused prolonged delays. “Let me say, as the subject minister, I accept full responsibility for the traffic disruption,” he said at the event held on the sea defence.

Justifying the need for arch, Patterson said the development or rehabilitation of a road would not have been of the same value or historical significance of the arch. “Beautiful roads are great but there is no denying that no one remembers the condition of a particular road fifty years later. No one jumps on a plane to ‘ooh and ahhh’ about a road. Ages from now, our history books would not remember the individual roads and bridges that would have been built unless, of course, they are monumental structures,” he said.

Credited with the actual construction of the arch were Engineer, Marcel Gaskin and Industrial Fabricators Inc after one year of planning in collaboration with government and Ansa Mc Al.

Executive Chairman of the Ansa Mc Al Group of Companies, Norman Sabga expressed satisfaction that all of the work was done by Guyanese. “What is very gratifying as well is that a hundred percent of the design and the construction was done by Guyanese nationals so that was of particular importance,” he said to applause. 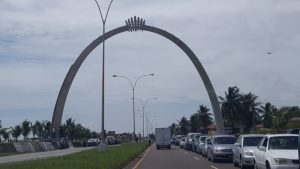 Sabga said the financing of the arch is his company’s expression of satisfaction with its business performance in Guyana over the past two decades. “Our business in Guyana for the last twenty-five years has flourished and this is our way of saying ‘thank you’ to the people of Guyana… and putting something back into the country,” he said. He said Guyanese “warmth” and “trust” have “made us a success.”

The most iconic Independence Arch is located on Brickdam, Guyana’s oldest street.

With the coming into effect of the Municipal and District Councils Act in 1970, the boundaries of Georgetown were extended to include the five former sugar plantations of Liliendaal, Pattensen, Sophia, Turkeyen and Cummings Lodge that today make up the single largest city ward.