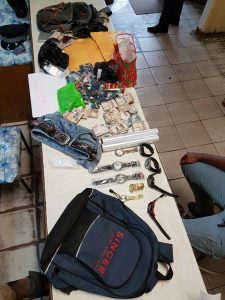 The items seized during operations at Bagotstown and Friendship, East Bank Demerara.

Two men and one woman were early Friday morning arrested and several items suspected to have been stolen were seized by police.

The Guyana Police Force said the “intelligence-led operation” at Bagotstown and Friendship, East Bank Demerara led to the arrest of the persons who were all found with narcotics in their possession.

“One of the males who was arrested in Bagotstown with the female, is wanted in respect of several armed robberies,” police said in a statement issued after 10 PM Friday.

Police said 424 grams of  marijuana, several wrist watches and other items suspected to be stolen or unlawfully obtained during the operation were seized.

2017-05-12
Denis Chabrol
Previous: Guyana peeved at US’ listing of Guyana, other Caricom member states as “major” money launderers
Next: WARNING: Ransomware attack on computers in progress; do not pay the ransom