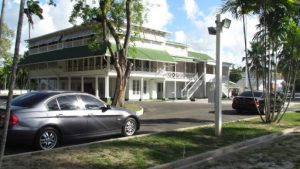 A GYD$14 million contract has been awarded to the German-based meeco Group, along with its Guyanese joint venture company, for the supply and installation of a solar photo voltaic (PV) system at State House.

Demerara Waves Online News was told that materials have been already purchased and are due in Guyana next week following which installation would begin. Meeco said excess power would be supplied to the national grid. “By supplying the excess energy not needed for internal consumption directly to the grid, the State House contributes to foster the expansion of a sustainable national energy supply,”meeco said.

Company records checked by Demerara Waves Online News show that of the five directors, two are Guyanese- Yodhia Persaud,  who is the Managing Director of Guygas, and Sheik Rowling Khan who is the Information Technology (IT) expert at IPA Pharmaceutical Agency. Khan is also listed as the company secretary. The other directors are Konstantin Wolf and Thomas Beindorf, both of Germany, and Sudhansu Varma of Canada.

“The meeco Group and oursun Guyana are enthused by the opportunity to reduce the carbon emissions and bring environmental benefits to Guyana and the whole region by participating in several more of these tenders,” the company said.

meeco Group said the Ministry of the Presidency would be equipped with a state of the art 43 kWp solar rooftop system which will be synchronised with the grid.

“Within the scope of several tenders, as issued by the Government of the Co-operative Republic of Guyana, meeco will install a sun2live solar rooftop solution on the State House in the capital Georgetown. The system will produce more than 54,000 kWh of clean and sustainable energy per year and therefore ensure up to 35,000 kilograms of CO2 savings annually,” meeco  Group said.

The company hopes to use this contract as a window of opportunity to expand its portfolio in the coming years. “Realising the first project in Guyana, meeco and its local partner oursun Guyana aim to continue the distribution of renewable energy solutions and to contribute to change the local energy sector, switching from the use of polluting fossil fuels towards the expansion of renewable energy sources,” the company said.

The company said the tender for the installation of a solar solution on the State House in Georgetown is part of the general approach of the country’s government aiming to strengthen the use of renewable energy technologies and to strive towards a clean energy supply in the South American state. In order to turn the national energy sector green, several tenders for the installation of solar systems for public and private buildings have been issued, which demonstrates the government’s strategic and innovative vision.

The meeco Group says it  is highly experienced in the realisation of renewable energy projects in the Caribbean. Together with its Joint Venture PV Energy, numerous solar systems have been installed on the twin-island state Antigua and Barbuda, such as the 3 MWp sun2live solar power plant at the V.C. Bird International Airport, to name just one example of the 10 MWp program.