Incumbent President of the Guyana Public Service Union, Patrick Yarde was late Tuesday afternoon declared winner of the union’s elections, five days after members went to the polls across the country last Thursday.

Gaspar had signaled last week that he would not have been accepting the results.

When contacted by Demerara Waves Online News, Gaspar said he was not told anything by De Souza who passed him and supporters at about 5:30 PM and exited the union hall at Regent Street and Shiv Chanderpaul Drive. He said he only learned of the outcome when this publication called him.

Gaspar said he was mulling legal options as he believed he has been cheated. “Robbery. I have  been at this union since this morning…I am shocked. I have to consult with my people. I have to meet with my lawyers and the nation will know our next step,” he said.

“You are declaring a winner and you haven’t given the opposition any evidence that Mr. Yarde has won. You are saying that you took the information from phone calls and you haven’y certified it,” she said.

Early indications that Yarde would have retained the leadership of the union came in a statement he issued in behalf of himself and his executive, announcing plans to increased wages and salaries and address other lingering problems facing public servants.

Yarde had also accused unnamed persons of political involvement in the GPSU’s elections process but did not elaborate. Supporters of Gaspar’s team had in recent weeks appeared on an APNU television programme, heaping harsh criticisms on Yarde and his team.

The Ministry of the Presidency also on May Day had posted on its Facebook Page that President David Granger, accompanied by a ministerial team, had visited the union hall where he met with newly-elected GPSU President, Gregory Gaspar.

Television programme host, Malaika Ramsey and her guests from Gaspar’s team have rejected suggestions that the government was being drawn into the union’s business. 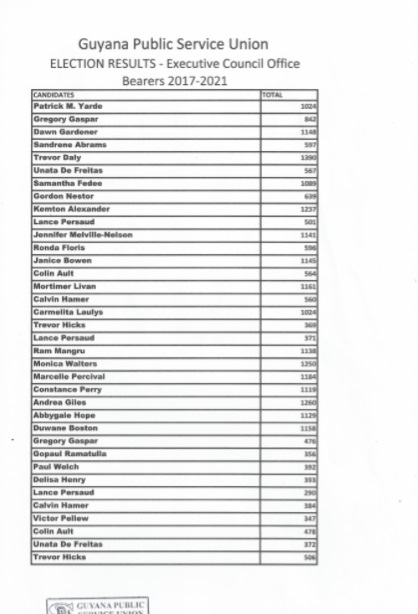