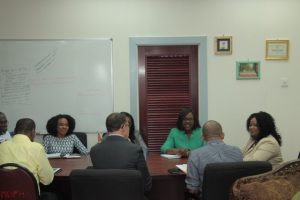 The Pan American Health Organisaton/ World Health Organisation has dispatched an expert to audit the procurement process at the Ministry of Public Health and the state-run Georgetown Public Hospital Corporation (GPHC), the ministry announced Tuesday.

“I found that it (the procurement process) was a bigger issue than I thought” Lawrence said during Tuesday’s early-morning meeting.

“I didn’t think it was as bad as I found it (but) this is the beginning of the process” of regularising operations in the wider health sector, Lawrence said.

Professor Jaime Espin Balbino of the Andalusian School of Public Health, Regional Ministry of Health is spearheading the forensic exercise which will target the operations of the MOPH and the Georgetown Public Hospital Corporation (GPHC) Health Minister, Volda Lawrence (MP) said Tuesday during a meeting with officials of those entities.

The Health Ministry said PAHO/WHO is funding the cost of  the audit.

Lawrence reportedly said the the audit into how things are currently done and the specific changes that will be implemented will provide the roadmap for the future to remove the existing “vast deficiencies in knowledge and manpower.” 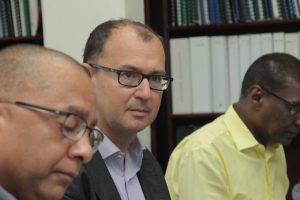 (Centre) Professor Jaime Espin Balbino of the Andalusian School of Public Health, Regional Ministry of Health who will be spearheading the forensic audit

The forensic audit comes on the heels of public complaints into the procurement process, the quality of drugs, and allegations of shortage of drugs, medical supplies and pharmaceuticals in the government-run sector. The announcement of the audit comes weeks after the Public Procurement Commission (PPC) had announced a probe into government’s “emergency” purchase of more than GYD$600 million in drugs without passing through the National Procurement and Tender Administration Board.

The opposition People’s Progressive Party (PPP) has tabled several questions about the procurement of drugs and other medical supplies in the National Assembly that it hopes the Minister of Communities, Ronald Bulkan and the Minister of Public Health will answer at the next parliamentary sitting on May 10, 2017.

While the government health sector has internal and external audits done, Lawrence feels that “a fresh eye” is needed to give the system a boost and help plug all “existing gaps”.

She iterated that the audit is not intended to harass those with responsibility in the sector’s procurement process “but to correct the system”.

“There is something wrong somewhere,” Cummings observed.

The trio identified managerial and policy shortcomings, non-implementation of plans of action crafted by the MOPH, a paucity of information from the public health sector which can impact negatively on the forensic audit efforts and shortage and hoarding of medication by patients nationwide.

Dr. Edwards is confident that Balbino is “the right person for the job” having a wide range of experience in the field having done similar work in Europe and Latin America. Nevertheless, he admitted that Balbino is undertaking a “daunting process” and that several consultancies will be needed to complete what Minister Lawrence wants.

He cautioned GPHC authorities not to expect immediate results following the audit, its recommendations and implementation.

“It’s not going to be accomplished overnight” Edwards said referring to the lengthy time it has taken other countries to get positive results.

While the political will to transform and modernise the MOPH and GPHC is evident, Balbino noted that this must be complemented by the appropriate financial backing and competent human resources.

“You are doing well (but) you can improve” Balbino told the MOPH and GPHC teams.

In recent months, the Public Health Ministry has handed over several persons to the police to probe the alleged disappearance of quantities of drugs and other medical supplies.