UG votes against rental of five-story building for downtown campus 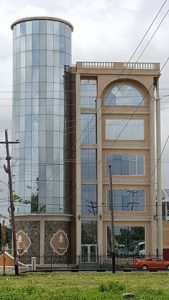 The University of Guyana’s Council– that tertiary institution’s highest decision-making body– on Thursday finally said ‘no’ against the rental of a building for US$28,000 monthly to house a proposed “downtown campus.”

“It was not approved principally because it was not the best use of our resources,” a source told Demerara Waves Online News. Asked if it was a unanimous decision, the source would only say “it was close”.  Another usually reliable source added that four voted against , three for and two abstentions.

“The Downtown Campus was not approved (It will not be brought back to the Council for any further consideration). Chancellor,  Professor Nigel Harris urged Vice Chancellor, Professor Ivelaw Griffith to craft another plan,” said the source.

Another source declared that “it has gone for good” in reference to the rental of the five-story building at Camp and Lamaha Streets, Georgetown. “If you bring a motion and it doesn’t succeed, it means that it has failed,” said another source.

The sources said the proposed School of Entrepreneurship and Business Innovation has been approved, but would now be housed at the Turkeyen Campus from September, 2017.  The Vice Chancellor is now tasked with getting all the programmes to Academic Board for approval, and following UG’s recruitment rules by taking proposals for the appointment of faculty and staff for the School to the Appointments Committee.

The Council also decided that a “comprehensive review” of the School of Entrepreneurship and Business Innovation would be conducted at the end of its first year and a report submitted to the decision-making body.

The Council also decided that all matters with financial implications must be taken to Finance and General Purposes Committee for consideration and approval.

With the Ministry of Public Health already saying that it has an agreement with UG to house the Maternal and Child Health Unit in the five-story building at Camp and Lamaha Streets, it is now unclear what will be the status of their tenancy following  Council’s disapproval.

UG Vice Chancellor Professor Ivelaw Griffith had argued in favour of the downtown campus, saying that more space was needed for staff and students, and that rental to the Ministry of Public Health and little known locally Premier International Bank would have earned millions of dollars annually.

Professor Griffith had said in the circular to the university community that space is vitally needed to expand UG’s operations and offer courses and programmes that will bring in much needed revenue.

2017-04-27
Denis Chabrol
Previous: Regional Energy Consultant to verify ExxonMobil natural gas projections—Minister Harmon
Next: Nandlall defends govt paying for his law reports: “When I took this job, I took it at a loss of income”; plans to challenge criminal charge in High Court