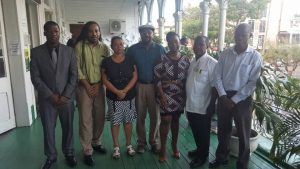 The Mayor and City Councillors on Wednesday approved a  seven-member team to negotiate a revised parking meter contract with Smart City Solutions, in keeping with the wishes of central government.

Under the chairmanship of Malcolm Ferreira, the others are Vice Chair, Noelle Chow-Chee; Carlyle Goring; Tricia Richards, Ivelaw Henry, Roopnarine ‘Ron’ Persaud and Heston Bostwick. Persaud has long opposed the introduction of parking meters, especially by foreign investors, and has suggested alternative revenue generating measures for the municipality.

Demerara Waves Online News was told that the negotiators will hold their first in-house meeting on Friday as part of preparations to meet with their SCS counterparts. The team has been mandated to return to the full council with the outcome of its negotiations.

“Upon completion of the negotiation period to prepare a report and present same to Council at a meeting called for that purpose, setting out the proposals and or agreements arrived at,” states the Terms of Reference.

None of the principal negotiators-City Mayor, Patricia Chase-Green;  Chairman of the Finance Committee, Oscar Clarke; Junior Garrett and Town Clerk, Rosyton King- is part of the new committee. They had all trekked to Mexico and Panama as part of the talks before the controversial deal with SCS had been signed last year.

While Deputy Mayor, Lionel Jaikarran of the Alliance For Change (AFC) reiterated that he does not support the parking meter deal between City Hall and SCS, he sought a specific assurance from the Mayor that ordinary members of the public will be consulted. “The greatest stakeholder is the public- the public who have to pay these parking meters so if we could adjust that to include the public and public consultations, I would be more than happy. These are the people who have to go into their pocket and pay these meters and they deserve a voice,” he said.

The Mayor reiterated that all stakeholders such as Cabinet and SCS would be engaged to “bring the contract in harmony with the desires of the Council, Central Government, Smart City Solutions and the citizenry and so there will be consultations with the citizenry.”

The decision to go back to the negotiation follows Local Government Minister, Ronald Bulkan’s suspension of the parking meter bylaws on March 22, 2017 for three months.

Chase-Green explained that the City Treasurer is the legal and binding person to carry out negotiations for the Council, the Town Clerk is the legal signatory on behalf of the Council.

The Movement Against Parking Meters (MAPM), which draws sympathetic support from several businesses, private sector organisations and political parties, are maintaining that the City Hall-SCS contract should be revoked over concerns about transparency, sovereignty as well as several clauses such as the auctioning of vehicles without legal recourse, no responsibility for damage to vehicles, and the potential takeover of city lands for garage parking.