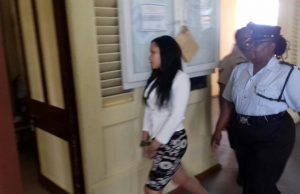 Angelique-Williams being escorted at the High Court.

A young woman was Tuesday handed down an eight-year jail sentence for killing her best friend in 2015.

Justice Navindra Singh deducted two years for time already served during her incarceration.
In 2015, Lloyda Renita Thomas met her demise after her former best friend Angelique Williams also known as “angie” fatally stabbed her during an argument  over who should sit where in a taxi.
This matter was brought before Justice  Singh in the High Court. Williams pleaded guilty to the lesser count of manslaughter. That plea was accepted on April 6, 2017.
Williams’ sentence was deferred since a probation report was requested by her lawyer, Mark Waldron.
During Tuesday’s hearing, a thorough report was given which revealed that,growing up, the defendant had a rough childhood since her close relatives had passed away while she was at a tender age, making life hard for her.
The report further revealed that both Thomas and Williams shared an apartment at 330 Sunflower Close, South Ruimveldt, Georgetown prior to the 2015 fatal incident.
The courtroom of Justice Singh became completely silent when Williams was asked to say a few words before her sentencing was handed down.
With tears in her eyes, Williams expressed her sincere apology to her family and the family of the deceased, noting that she takes full responsibility for her actions.
She added that Thomas was more than a friend but like a sister to her and as such she knows no amount of sorry can bring her back to life but begged the court for mercy since she is dealing with a difficult time.
Defense Attorney, Mark Waldron, in mitigation, asked the court for a suspended sentence since Williams showed remorse in her apology and that the incident was neither premeditated nor intentional.
He also added that his client was willing to take counseling to help herself get better.
Justice Singh, on the other hand, acknowledged the fact that Wlliams took responsibility for her actions at an early state.
He added,too,  that anger management classes should be administered to the defendant in order to help her later in life.
Justice Singh further recommended that before her sentence is up, Williams should try to acquire her Caribbean Secondary Examination Council certificate and also she should stay away from alcohol to save herself from another episode.
Having said all of that, Justice Singh sentenced Williams to eight years behind bars.