Govt appeals for patience in getting things done 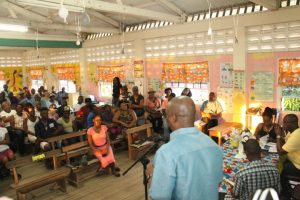 Amid growing concerns that government ministers have lost touch with the grassroots almost two years after they were elected to office, they are appealing for patience in improving the quality of life of Guyanese.

“A lot of the errors and the problems in Den Amstel Village, this government has inherited so what we’ll do is try to fix it. We are here t be fixers but please don’t think it can fix overnight or in a week. We will try to do what we can do,” she said, adding that “there are a lot of things that cannot be done right now because the budget for 2017 has already passed. Anything happening will have to go into the budget for 2018,” Ferreira said. 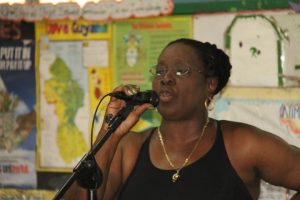 The Minister of State credited all the presidents of Guyana from Forbes Burnham to Donald Ramotar have helped “to form the fabric of who we are today” , but at the same time he accused the now opposition People’s Progressive Party (PPP) of attempting to revert Guyana to a plantation in which there are logies. He observed that the PPP has been waging a campaign of portraying the governing coalition as a uncaring. “The government that you elected on the 11th of May, 2015 will always consider the interest of the people first and I want to make that very clear because sometimes the utterances of the opposition want to feel or give the impression that we are uncaring of the impact of the decisions on the lives of the people of this country,” Harmon remarked in dealing with the restructuring of the state-owned Guyana Sugar Corporation (Guysuco). “The lives of the people of this country are our primary consideration in making decisions,” he said.

The fan-out by government ministers across Guyana in recent weeks has come amid grave concerns by ardent supporters of the APNU+AFC coalitions that they have not been receiving promised jobs, but have instead been treated to increased taxes. 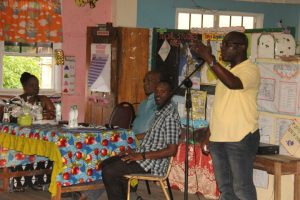 Chairman of the Neighborhood Democratic Council (Hague-Blankenburg) , Kenton Hilliman did not go into details in his brief welcome and opening remarks but said he was being bombarded with questions. “As I go in the streets daily, many questions are being asked. Many requests are being made and also many demands are being made…Demands cannot always be met at the same time,” he said.

Region Three parliamentarian, John Adams, in  addressing the concern of impatience, he noted that the now opposition People’s Progressive Party (PPP) had taken more than two years before getting many things done. “As I have said to so many persons, eve our supporters, we want to see everything happen at the same time; and I said to them and I am saying to this group this afternoon that the PPP spent twenty-three years in office but they did not do everything they did in two years. The APNU+AFC government- we haven’t even celebrated our second birthday as yet- but we can see the things that they have done,” he said.

Responding to several questions and comments from the floor, the Minister of State  welcomed ideas for the construction of a gym and world-class swimming pool nearby the Den Amstel Youth Camp. He also assured that a road that was allegedly destroyed by BK International construction company would be repaired. He encouraged a Den Amstel resident to continue her social and community activities for the benefit of youths, mainly females.

Region Three parliamentarian, Adams said so far the Den Amstel Youth Camp has been reconstructed and that efforts are being made to have a model agricultural school in the area for our  “young people to do something with their hands for those who can’t use their brains.”