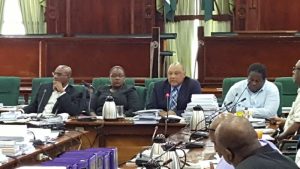 The Chinese Development Bank (CDB) has asked Guyana to not give out lands once held by Bai Shan Lin Forest Developers Inc, since it is looking to secure finances to re-capitise loans owned by that company.

This is according to Minister of Natural Resources Raphael Trotman, who today (April 19, 2017) provided an update on the operations of the sector to the Parliamentary Committee tasked with oversight of the Natural Resources sector.

According to Minister Trotman, there are currently no activities ongoing on the two concessions totaling 180,000 hectares of forest since the agreements were not renewed having expired last year.

The total size of the concessions is 680,000 hectares including joint ventures.

Trotman was at the time lamenting the 15% decline in earnings from the forestry sector in 2016 totalling some US$38M.

He blamed a weakened Asian economy in addition to the loss of the Bai Shan Lin and Barama companies no longer operating the sector.

Trotman reported too that the five joint ventures that Bai Shan Lin had illegally entered into with local companies were also revoked and the lands seized.
He said government was left with little choice, since in addition to the national outcry over some of the company’s practices, it had also racked up debts for which it could not pay  “We could not allow a company to remain active in a forest and not be paying royalties and fees for the concessions,” According to Trotman.

Regarding the logs that have already been felled but left at a standstill, Minister Trotman explained that the Guyana Forestry Commission is exploring several options in order to dispose of the logs including the possibility of an auction or to invite companies to express their interest or desires.

According to Trotman, the administration is looking to see the forestry sector recover before the end of the day since three quarters of the 1.6 million hectares held by Barama is earmarked for allocation.

Minister Trotman said, one of the blocks will be held for conservation, another to be allocated to small loggers and two have been earmarked for use by international companies.

He reported that the Ministry is already in receipt of 17 Expressions of Interest (EOI) which are currently being evaluated and that the review process is expected to be completed by the end of the month.

This, in addition to the 69 concessions given out at the end of last year, is expected to boost production.

Providing an update on gold production, Minister Trotman reported that the sector is already on target to achieving 700,000 ounces in 2017.

According to Trotman, the first quarter of the year has already seen 163,000 ounces being declared.

Providing an update on the record 713,000 ounces of gold declared in 2016, Minister Trotman used the occasion to point out that small and medium scale miners contributed 70 per cent of the declarations while the two large mining companies contributed 30 per cent.

Minister within the Ministry of Natural Resources Simona Broomes also provided the Parliamentary Committee chaired by Communities Minister, Ronald Bulkan, with an update on the syndicate initiatives.

Other members of the committee present include, Minister of State Joseph Harmon, and Members of Parliament, Jermain Figuera, Odinga Lumumba, Pauline Sukhai and Neendkumar among others.