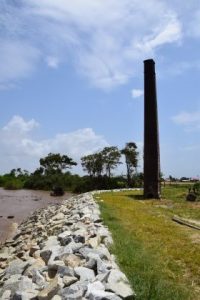 Plans are underway to upgrade all the roads on the Essequibo Coast in Region Two to asphaltic structures, and to strengthen the sea and river defences.

In an interview with the Government Information Agency (GINA) Regional Engineer, Region Two, Phillip Amos said the aim is to make the roads’ surface more durable so they could last longer.

Amos explained that for 2017 approximately $200M was allocated to the Region for the rehabilitation and construction of urban and miscellaneous roads. He said a number of projects will commence shortly which will see all the back roads on the Essequibo Coast being improved.

“We could spend all the money in one area, but we got to spread it across the coast; we started asphalting all the back roads. Prior to the works, there was surface treatment which was done to certain level of completion, leaving the roads in a deplorable state with pot holes. When the roads are completed, they will last a long time,” Amos explained.

The Regional Engineer highlighted that the Region is now able to withstand and maintain the temperature of an asphalt plant. He added that several asphaltic roads were already completed in areas including Charity, Daniel’s Town, Anna Regina, Good Hope and Reliance.

Amos stated that the Ministry is committed to improving infrastructure in Region Two. “Slowly, but surely, we will upgrade all the roads to an acceptable standard so people don’t have to drive along the road and negotiate pot holes and other obstacles,” he said.

Meanwhile, Region Two has also benefitted from sea and river defence upgrades. During last year over $40M in contracts were cleared to upgrade sea defences on the Essequibo Coast. 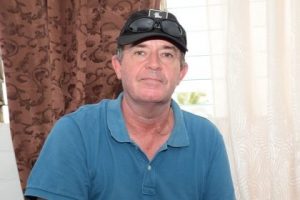 District Engineer, Sea and River Defence, Region Two, Mohamed Juma explained to GINA that that these works were completed and plans are moving apace to improve other sea and river defences in the region.

Juma pointed out that there are two contracts that were awarded recently for the maintenance of the concrete structure in Charity. He added the Region also plans to construct some revetments in the Pomeroon River, and within a month or two, a contract will be awarded for the construction of 175 meters rip-rap structure and sheet steel pile work at Charity river front.

All of the works undertaken in the Region were critical, Juma said. He explained that heavy erosion was taking place at Aurora, threatening the Region’s heritage chimney.

“We did 120 meters of a complete rip-rap structure to save our heritage site that we have here. This chimney was constructed in 1908, it’s the oldest structure we have on the Essequibo Coast and our idea was to save the structure because it was in a deplorable state; the natural defence that was here was mangrove and it was eroding a lot,” Juma underlined. 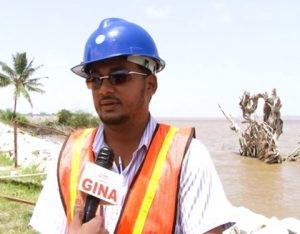 In the interim, the Region’s maintenance group consisting of nine employees continues to conduct regular maintenance of other sea and river defences in the region from Charity to Supenaam. “The team regularly does revetments with back fill with either clay or sand and sand creek bag walls. We do weeding also to get a clear foreshore in case we have to do any monitoring,” Juma highlighted.

The government continues its support for sea and river defence strengthening in various coastal regions, as part of efforts to mitigate the effects of climate change while it continues to improve infrastructure across the country.

2017-04-18
Denis Chabrol
Previous: Jagdeo to shortlist from seven …as one declines nomination for GECOM chair
Next: Man, who allegedly drew gun and threatened to shoot policeman, shot dead