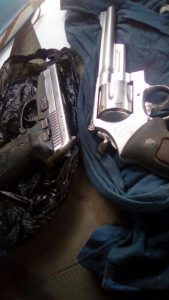 The guns police said they found in possession of two men at Land of Canaan, East Bank Demerara on Thursday.

A poultry farmer remained in police custody on Good Friday after he was arrested one day earlier on the Essequibo Coast allegedly with 11 pounds of cocaine in his possession, police said in a statement.

The Guyana Police Force said that at about 4:10 Thursday afternoon, the 30- year old man was held at a road block on the Aurora Public Road with what appeared to be cocaine. “The suspect who has since admitted ownership of the illegal substance is being processed for court,” police said.

Police said a search of his vehicle unearthed eleven pounds of suspected cocaine.

Meanwhile, two  men were held at Land of Canaan, East  Bank Demerara at about 12:25 Thursday afternoon with one .44 Revolver and  one 9mm pistolwith eleven live matching rounds.

“The police in ‘A’ Division acting on intelligence stopped a motorcar on Land of Canaan Public Road, East Bank Demerara about 12:25hrs today (Thursday) and conducted a search during which two illegal weapons,” were found, the Guyana Police Force said in a statement.

2017-04-14
Denis Chabrol
Previous: Mabaruma, Port Kaituma to benefit from all-weather roads for first time
Next: “Government appointing their appointees but guising it as if it is a consensus”- Juan Edghill on SARA