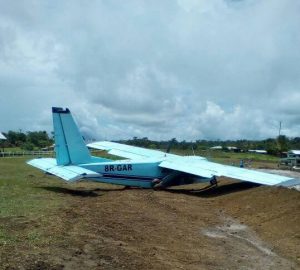 An Air Services Limited (ASL) plane Wednesday morning ran off the edge of the Kopinang airstrip, causing damage to its undercarriage and the destruction of one of its landing gears.

Neither the pilot nor the lone passenger was injured.

A company source told Demerara Waves Online News that the Britten-Norman Islander, which was piloted by Captain Azam Ally, ran over the edge of the airstrip,  which is currently being repaired and extended, was waterlogged due to rainy conditions at the time. “The right main gear broke off. It suffered substantial damage but not totalled,” an ASL source said.

A preliminary assessment has revealed that repairs would take at leas four days.

The plane was shuttling food and other supplies from Mahdia to Kopinang when the incident occurred.