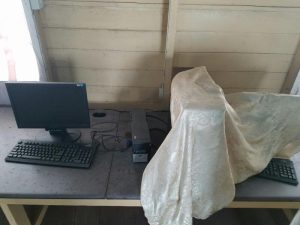 Vice Chairman of the Enmore Neighbourhood Democratic Council (NDC), Iqbal Dawud on Saturday denied that there was a plot to sell several computers that were seized by  government earlier this week, saying they are the Council’s property and a decision had been taken to sell them because they are outdated.

He said the decision was made at a public statutory meeting of the NDC and recorded in the Minutes, and so there was “nothing sinister, secretive or illegal”  about the move as was being claimed by the eGovernment Department of the National Data Management Authority (NDMA).

“The truth is that these computers are the property of the NDC. They are outdated and most of them were malfunctioning. As a result, a decision was taken by the NDC that these computers would be sold, if possible, and replaced by the NDC with a new compliment, so that the community can continue to benefit from their use,” said Dawud.

The Enmore NDC said it rejected government’s claims that there was “a plot was discovered to sell” the computers, which were seized by State Assets Recovery Unit (SARU) on Thursday.  “There was no such plot and nothing clandestine or unlawful was intended,” said Dawud.

The opposition People’s Progressive Party (PPP), which controls that NDC, says legal action was being contemplated.

The Ministry of Public Telecommunications  has said the the 15 computers, which were in a state of disrepair,  improperly stored in dusty conditions and appeared unused for a long time, would be returned to the Enmore community once it has been agreed that they would not be sold or otherwise disposed of.

However, the The Enmore NDC maintained that it is an autonomous legally elected body that is independent of the Government and is legally authorised to make its own decision. “SARU and the Government have no authority to interfere with decisions of the NDC.  Therefore, we reject the Government’s attempt at justifying SARU’s illegal actions of trespass and unlawful deprivation of the property of the NDC.”

The Enmore NDC stated that SARU officers and Ministry of the Presidency employees acted unlawfully, excessively and abused their authority when they unlawfully entered upon the NDC’s premises and seized the NDC’s property. “This is nothing short of Executive lawlessness.”

2017-04-08
Denis Chabrol
Previous: President appeals for political collaboration in Region Two
Next: “I will do everything possible to help you to get jobs”- Granger tells youths