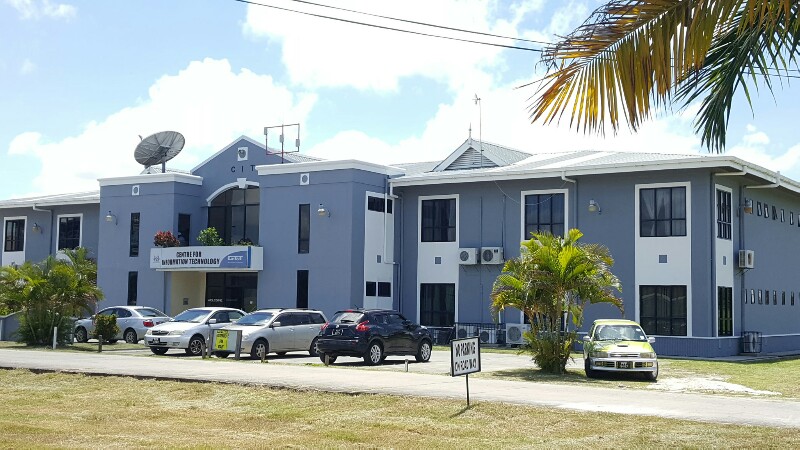 The University of Guyana’s Centre for Information Communication Technology at the Turkeyen Campus.

University of Guyana Vice-Chancellor Professor Ivelaw Lloyd Griffith has asked the Criminal Investigation Department (CID) of the Guyana Police Force to launch an investigation into the operations of the Centre for Information Technology (CIT), following the levelling of serious allegations of theft of  equipment from the Centre and misconduct of staff members.

“The Manager of the Centre and several employees have been sent on leave as an interim measure to allow the investigation to proceed without disruption of evidence, and to preserve a safe, orderly, and professional work environment. A temporary manager has been identified to oversee the operations of the  Centre during the conduct of the investigation,” UG said in a statement.

In meeting with the relevant CIT staffand CID officials  Monday ,  UG said its Vice-Chancellor Griffith voiced his commitment to having the appropriate action taken by the  Police after the investigation ends.

Additionally,  UG said the Ministry of Public Telecommunication has been asked to conduct a forensic audit of the  CIT operations at the Turkeyen and Berbice campuses and the four centers of the Institute of Distance and Continuing Education located at Anna Regina, Georgetown, Linden and New Amsterdam.

Vice-Chancellor has briefed the presidents of the two university unions and the students’ society, as well
as relevant university leaders on the development. He also wishes to assure the university community that the Centre’s service to students and staff will be normal while the CID conducts its comprehensive investigation and the Ministry of Public Telecommunications undertakes an institution-wide audit of the CIT, which has been plagued with multiple challenges for some time.

With a current enrollment of some 8,000 students, The University of Guyana (UG) has graduated more than 20,000 students who have gone on to successful careers locally, regionally and internationally.

The  University is also a major contributor to the national economy and to business and industry. Established in 1963 on a part-time basis with shared space at Queens College, UG moved to its own campus at Turkeyen in 1970 and expanded in 2000 with the addition of the Tain Campus. It now offers more than 60 Under-graduate and Post-graduate Programmes including the Natural Sciences, Engineering, Environmental  Studies, Forestry, Urban Planning and Management, Tourism Studies, Education, Creative Arts,  Economics, Law, Medicine, Optometry and Nursing. Several online programmes are available and UG also offers extra-mural classes at four locations through its Institute of Distance and Continuing
Education (IDCE).