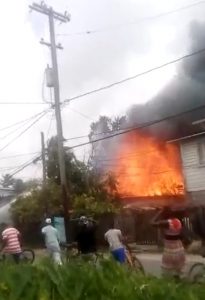 A fire at Middle Road, La Penitence, Georgetown destroyed one house and left a couple homeless while raising suspicions about the cause of the blaze.

Demerara Waves Online News was told Colin Clarke was nearby on his way home from a weeding job when he saw the fire and thought that his neighbours were burning rubbish. After he eventually realised that it was the bottom flat of  his house at 183 Middle Road, he gained entry to the building and tried unsuccessfully to extinguish the blaze.

Fire fighters and residents assisted in preventing the fire from spreading to other mainly wooden houses in the neighbourhood. The battle was dogged by a shortage of water. Thick vegetation clogged a nearby canal.

Clarke’s wife, Marilyn, was said to have been on the East Coast Demerara at the time of the fire.

A nearby house where Annetta Olive and her baby live was scorched by fire. Olive said she was asleep and when she heard s 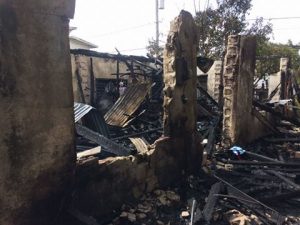 houts of ‘”fire” she exited the building with her child.

The house that Olive occupies is owned by Clarke’s cousin who is the power-of-attorney.