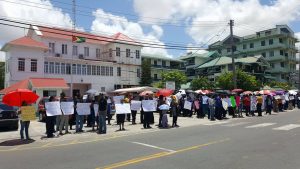 Parents, teachers and students of several private schools picketing the Ministry of Education.

Hundreds of teachers, parents and students of several privately-owned educational institutions on Wednesday thronged outside the Ministry of Education’s headquarters, demanding that government scraps the 14 percent Value Added Tax on tuition fees.

They also frowned on the government’s suggestion that students have the option of attending state-owned schools, saying the physical conditions and quality of teaching is very poor.

A number of persons, who were outside the 21 Brickdam offices of Minister of Education Dr. Rupert Roopnaraine, said they were mulling legal options against government.

Savita Gowkarran, whose child attends Mae’s School, said she and other parents believed they were being penalised for making a sacrifice to pay for quality education for their children. “We feel like we are being punished for the decision that we are making to put our children in private schools rather than trust our public system which is not up to par- we have our teachers not being paid properly, we have them not having adequate material” she said.

She questioned whether the public schools system even has the space to accommodate the large number of students who are currently attending private schools. 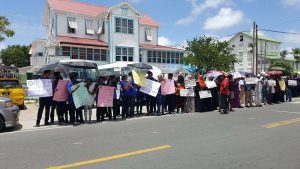 She said it appeared as though government “just picked up their calculators without having any empathy for us” and so far the Minister of Education has not responded favourably to their four-week old request for a meeting to discuss their concerns. Gowkarran said the protests would intensify each week and “we are going to get stronger.” Gowkarran, who is a part of the Guyana Private Schools United Committee,  did not rule out the possibility of legal action.

Reacting to concerns by government that many of the private schools have not been paying all their taxes, another parent urged government to go after the schools’ administrations. “If the schools are delinquent in tax compliance, then go after the schools. Don’t come after the parents,” Prema Roopnarine told Demerara Waves Online News. She lamented that often public school students do not have adequate teachers and there is no scope for parent-teacher meetings on the progress of students.

Roman Catholic Bishop, Francis Alleyne, who was among the demonstrators, called on government to support education. “Education needs to be something that is given all the concessions and priority before everything else,” he said. Alleyne said many parents were making sacrifices to send their children to private schools, but are now being faced with the stark possibility of withdrawing them from those institutions. He said he was aware that at least four students have been withdrawn from Marian Academy, a Roman Catholic school.

The Parent, Teacher, Students Association (PTSA) of the East Street-based Islamic School also objected to the 14 percent VAT on school fees. “Parents are already struggling to pay the fees. This 14 percent additional cost will harm us, it will be no good for us,”  said PTSA Assistant Secretary-Treasurer, Farina Khan.

Principal of the Saraswati Vidya Niketan school on the West Coast Demerara, Swami Aksharananda said the imposition of the VAT has eroded parents’ choice of sending their children to private school. Optimistic that President David Granger would respond to a call for a meeting, Aksharananda said in the case of the West Demerara all the government-run secondary schools are in a run-down state. “Those students who fall less than 420 marks, it is not a choice for them. They are sent to dumps, basically. I am sorry to speak like that because it is part of our system. Nobody wants to send their children to schools like that,” he told Demerara Waves Online News.

He believed that there is space for a legal argument in which a tax is used to discriminate against one’s right to freely access education.

Chartered Accountant and Attorney-at-Law, Christopher Ram echoed the views of several parents that it is the duty of the Guyana Revenue Authority (GRA) to audit the schools’  accounts to ascertain whether they are tax compliant. Ram, who was a member of a government-appointed tax reform committee, said government has several options to acquire funds that they are hoping to secure from the VAT on tuition fees. They include implementing the recommendation for an increase in the excise tax on alcohol. “You would have more than covered the tax that you are expecting to get from these private schools, the same question on cigarettes,” he said, adding that government can get several benefits from increasing the sin taxes. Those include dealing with social problems and reducing traffic accidents.

Since the introduction of Income Tax in 1929, he said Guyana has never before taxed expenditure on education, amounting to tax on human capital.