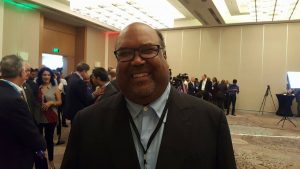 Vice President (Refining and Marketing) at the Petroleum Company of Trinidad and Tobago (Petrotrin), Astor Harris

Trinidad and Tobago will be able to refine Guyana’s oil although the quality is different, contrary to a former Energy Minister of that twin-island country, a senior official of that Caribbean nation’s oil company.

Vice President (Refining and Marketing) at the Petroleum Company of Trinidad and Tobago (Petrotrin), Astor Harris told Demerara Waves Online News that Guyana’s oil can be blended and refined in that twin-island country.

“The oil to be produced by Guyana can be refined in Trinidad. Even if it’s a bit light, we can blend it with other crudes because we purchase a range of crudes and then we blend them to get the products that we need,” he said moments before the opening of the Guyana Oil and Gas Conference (GOGC) at the Marriott Hotel on Sunday. The event has been organised by the Guyana Oil and Gas Association (GOGA).

Harris stated categorically that “there is a viable market for Guyana’s oil” at Petrotrin located at Pointe-a-Pierre. The Petrotrin official said his country’s refinery has the capacity to refine Guyana’s crude oil to bring it up to a standard that would allow it be compared to the West Texas Intermediate valuation standard.

The Petrotrin Vice President said his company is “very interested in Guyana’s success as a Caricom (Caribbean Community) member”. “We have a stake in that for the development of Caricom. That’s a major interest for us,” he said.

On the issue of Petrotrin currently having remaining capacity of 18,000 barrels per day, the Petrotrin official said “we can vary our intake by reducing the amount of international oil.” “There is room for the Guyanese oil. We will just reduce and optimize how much we take from the international market,” he said. Harris said it is not about giving up existing sources of crude oil in favour of Guyana’s, saying it’s a business proposition, strategic alliance and what is best for Caricom.

Petrotrin currently processes about 42,000 to 53,000 barrels of oil being produced by Trinidad and Tobago.

That country’s former Energy Minister, Kevin Ramnarine had said that Petrotrin might be more able to use Guyana’s oil  to dilute heavy crude.

his address at the opening of the GOGC, Minister of Natural Resources, Raphael Trotman said government was still studying whether it is feasible to build an oil refinery here.

Guyana’s official oil deposit is estimated at 1.6 billion barrels, with the prospect of that figure growing as ExxonMobil continues to drill more wells successfully. The company is currently evaluating the find at the Payara well even as it drills another exploratory well at Snoek.