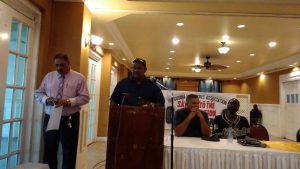 The Guyana Used Tyres Association (GUTA) is warning that should government continue with the planned importation of used-tyres into the country, as much as 5,000 persons stand to lose employment in the $100M revenue earning business—a situation that could in fact lead to a new smuggling industry.

GUTA Executives made this pellucid today (March 24, 2017), when they met with members of the press, to voice their concerns and agitate for broader consultations with government and urged not proceeding with its unilateral decision to ban the import of used tyres.
GUTA Public Relations Coordinator, Nazim Hussain along with Vice President, Mustaak Mohamed, Treasurer Abdool Hamid and Kumar Persaud, met with a press delegation today (March 24, 2017) at the Georgetown Club, Camp Street, to announce that the group has received permission from Police Commander, Clifton Hicken to stage a protest exercise in the coming week outside of State House.

Speaking to media operatives ahead of next Tuesday’s protest action, Hussain maintains there is no statistical data behind the assertion that used-tyres cause accidents.

He points instead to speeding, drinking and driving, and being distracted by cell-phones, as being the primary reasons for accidents in Guyana.

According to the GUTA Public Relations Coordinator, the association is not looking for a confrontation with government but is instead interested in consultations since he, along with the other executive members are of the opinion that some 5000 persons across the country stand to lose gainful employment as a result of the ban on the importation of used tyres.

The group is further contesting that there is no law on the statute books in Guyana which speaks to a minimum requirement with regards the use of used tyres on vehicles.

Hussain insists that the Guyana National Bureau of Standards (GNBS) should be in a position where it is in possession of the technology to differentiate between ‘good used tyres’ and ‘sub-standard new tyres’.

The group is arguing that GNBS is currently unable to test the quality of a tyre, new or used and that the labeling ‘new,’ does not guarantee the effectiveness of a tyre since many so-called new products are of an inferior quality to many used-tyres.

GUTA Vice President, Mustaak Mohamed was adamant in his lamentations that there is no basis for the ban of used tyres in Guyana.

Mohamed said used-tyres are in fact used across the developed world, such as in Europe and North America. In lashing out at government’s decision to go ahead with the ban on the importation of used tires come April 1, 2017, Mohamed said the administration “is already unable to find jobs for young people.”

President of the Guyana United Mini-Bus Association, Eon Andrews was also on hand to lend support to the used-tyre association in its call for government to rescind the decision.

Andrews, representing what he called “poor people transportation,” reiterated that the cost of the tyres will undoubtedly increase as a result of the ban on used tyres.

He reminded that public transportation is not provided by the government and as such it is the small private operators that would have invested in the transportation service locally.

According to Andrews, “a businessman gets into business to get money and as long as the input cost go up, he is going to pass it down to customers.”

Andrews along with the GUTA Executives explained that while there is a welcomed reduction on the taxes charged on the importation of new tires, the cost disparity remains prohibitively high.

The contagion effect will be felt across all sectors, Hussain said and argues further that even the farmer brining produce to market on trucks and canters will have to eventually filter the increased costs into the price of their produce.

Andrews predicted that the demand for use-tyres will continue to be high which will inevitably lead to smuggling and the black-market sale.

Maintain that tyres are not a luxury in Guyana, he is of the opinion “If we are not careful and you find persons cannot afford to buy those tires but they need it–because most times in our country it is not a luxury but a need—you will have a kind of smuggling culture… What I am fearful of is that can develop a cartel of persons to start stealing vehicles to get those tires.”

The Mini-Bus association president posits, “we are not an affluent enough society to say we must only use, used-tires.”