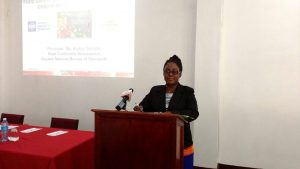 The Guyana National Bureau of Standards (GNBS) has secured a US$9M (G$2B) loan from the Inter-American Development Bank (IDB)—monies the entity intends to put towards the improvement of its testing infrastructure and capacities, across its laboratories countrywide.

The disclosure was made today (March 23, 2017)by GNBS Executive Director Candelle Walcott-Bostwick, who was at the time speaking with Demerara Waves on the sidelines of a ‘Food Safety Symposium’ in the Conference Room of the Guyana National Library.

Falling under the Ministry of Business, Walcott-Bostwick said “that loan will help us to strengthen national quality infrastructure in Guyana.”

The GNBS Executive Director related that one component of the loan will go towards strengthening the network of laboratories across the country, “so that we can boost the competitiveness of our local products.”

According to Walcott-Bostwick, the existing labs such as the Government Analyst Food and Drugs Department, the lab attached to the Guyana Rice Development Board, the Livestock Development Board, the Institute of Applied Sciences and Technology and the Pesticides and Chemical Controls among others, would have all been assessed back in 2012 and existing gaps identified.

As such, the US$9M IDB loan will be going towards addressing the deficiencies identified.

She told Demerara Waves that by the end of the five year implementation period of the loan, we should see more laboratories in Guyana being accredited in addition to new supplies for GNBS.

Speaking to some of the new testing equipment for GNBS, Executive Director Walcott-Bostwick told Demerara Waves, “we should be receiving new facilities for metrology and testing operations…there is need for us to have additional instruments to be able to calibrate more items that are used in industry.”

She said, the US$9M will allow GNBS to be able to expand its scope of work with regards its testing capacity. 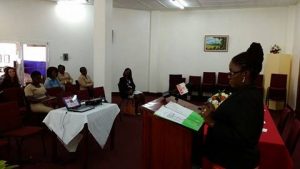 Held under the them ‘Make Food Safety a Priority’ one-day symposium held in the Conference Room of the Guyana National Library was aimed primarily at sensitizing local manufacturers and producers as to the pitfalls of failing to adhere to standard requirements, throughout each phase of production and distribution.

The Executive Director used the occasion to lament the failure on the part of the local business community, to adhere to set standards—many of which have been developed by GNBS along with international best practices.

She told those gathered for the symposium that standards are in large part voluntary in Guyana, which has resulted in situation where the onus is in manufacturers to be committed to implement the prescribed standard within their entities.

The GNBS Executive Director said, “we recognize that the majority of our local businesses, especially the small businesses have not been conforming to the minimum food safety requirements…Standards are basically voluntary, so at the GNBS we provide technical assistance.”

She conceded that standards should in fact be driven by consumers, which has seen GNBS looking to aggressively promote the benefits of adopting standards, “in Guyana we have a society where people prefer a mandatory system in place, which is not the best.”

She lamented: “we have a number of product standards at the GNBS and our manufacturers are not buying them to implement.”

The GNBS Executive Director said while labelling standards in Guyana are mandatory and enforced by the Food and Drug Department, there still exists a fragmented monitoring and enforcement system in place—a matter she is hoping will be addressed in the promised Food Safety Laws.

Responding to the recent incident where a person bought a food at a popular Georgetown Chinese eatery but was reportedly met with a ‘tooth’ in the ‘Chicken Fried Rice,’ Walcott-Bostiwick said the specific incident will have to be taken up by Public Health Authorities.

She told Demerara Waves that the Food Safety Bill which is slated to be voted on imminently in the National Assembly, will provide a framework for a more consolidated approach in managing food safety issues in Guyana.