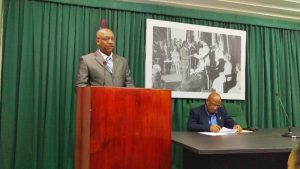 Cabinet has approved a new Board of Directors for a fresh state agency, the Power Producers & Distributors Incorporated, which is now tasked with operating and maintain Guyana’s power generational facilities, after the contract with Wärtsilä expired some time ago.

The new Board includes Mark Bender, Aaron Fraser, Attorney-at-law Ronald Burch-Smith, Chartered Accountant Harriram Parmesar, Attorney-at-Law Stephen Fraser, a member of the opposition, the permanent secretary of the Public Infrastructure Ministry, and one other member.

Minister Harmon made the announcement to the press corps during his post-cabinet press briefing today, March 23.

Harmon made mention that Guyana was paying Wärtsilä a considerable amount of money, which would now assist in better remunerating persons now attached to the new state agency, as well as save money for the Guyana Power and Light Inc, which previously paid Wartsila for supervisory services.

“We need to invest in our own,” Harmon said, adding, “they are competent and we need to give them that assurance.”