Vehicle clamping heightens as Gov’t suspension yet to take effect 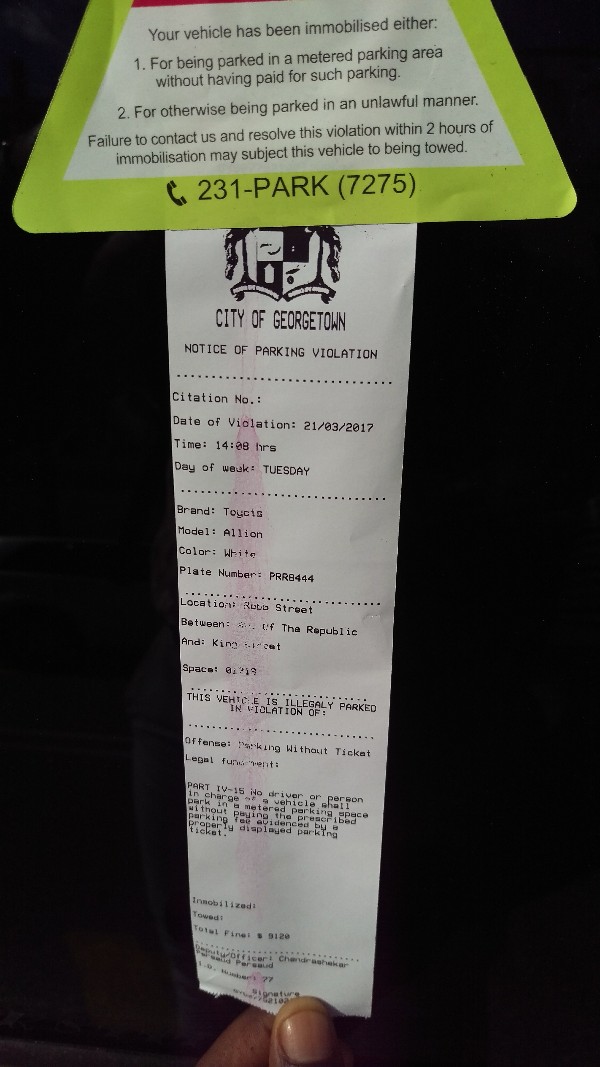 A parking ticket attached to one vehicle clamped on Robb Street.

Vehicle clamping was visibly heightened in the capital city today, March 21, as central government’s recent order to suspend the parking meter regime is yet to take effect.

Despite an expectation that the parking meter by-laws would be suspended at an extraordinary statutory meeting of city council on Monday, the Council instead voted to consider the position made by Communities Minister Ronald Bulkan that the entire parking meter system be suspended for three months.

The decision was taken as protesters, associated with the Movement Against Parking Meters (MAPM), gathered outside city hall. “Revoke!” was the message the body called for as they enter week 8 of protests against the parking meters.

At the level of the High Court, two orders of rule nisi are being heard by Justice Brassington Reynolds. 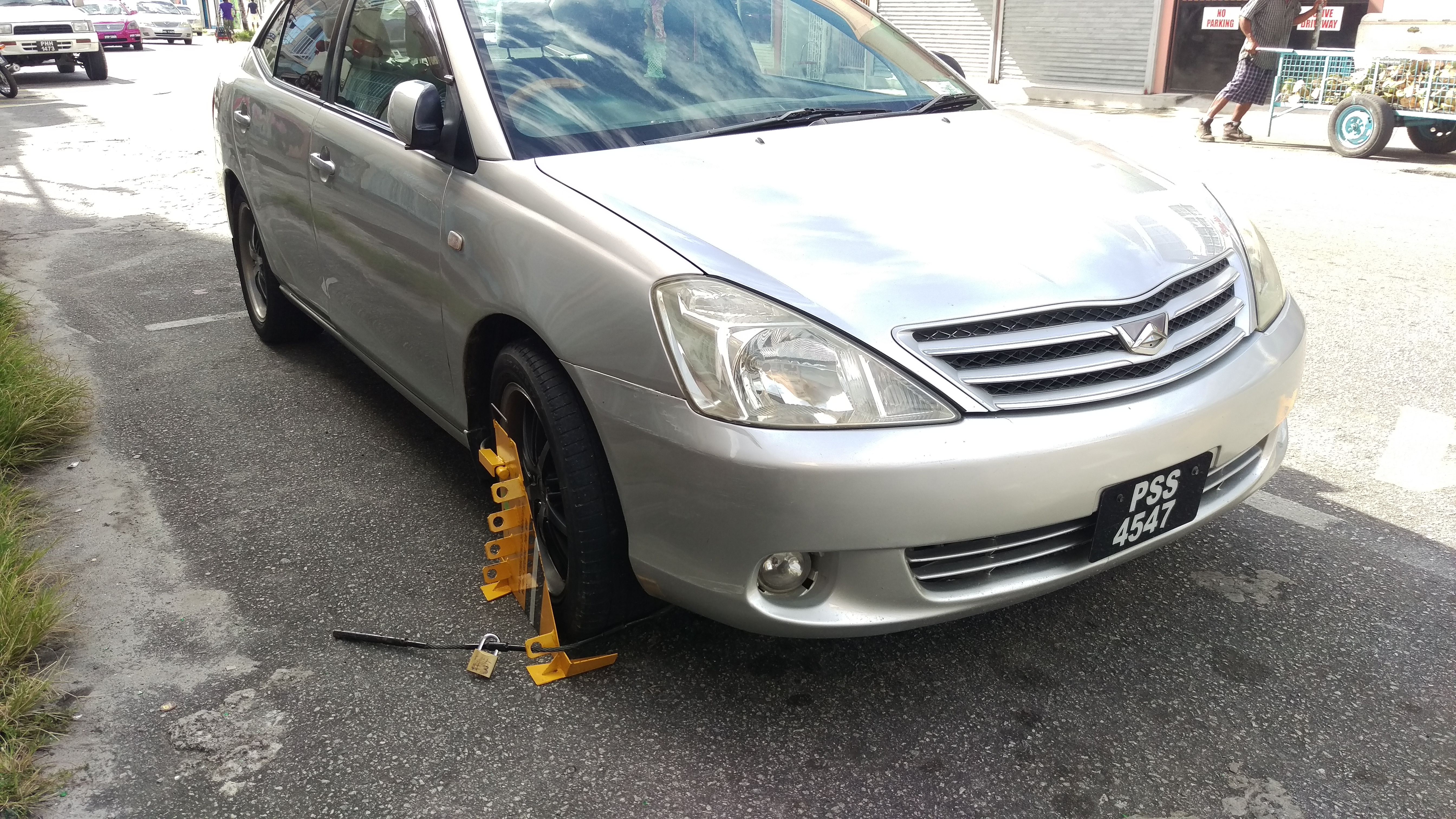 One of the actions was brought by the New Building Society (NBS), while the other was brought by a private citizen, Mohendra Arjune. Those cases come up again in early April.

At the level of the Georgetown Magistrates’ Court, city magistrate Annette Singh will be hearing a considerable number of parking meter-related court cases in a matter of days.

A number of ‘damage to property’ cases were also brought against Georgetown citizens as a number of motorists have tried to damage the clamps in protest of the parking meter regime.

A walk around Georgetown today would reveal a number of vehicles clamped, seemingly more than were clamped in previous days.

Immediately following the Communities Minister’s order, Georgetown Town Clerk Royston King had written to the Minister expressing concern on a particular clause called the “terror clause” where the city would have to pay a significant amount of money to Smart City Solutions (SCS), if the city administration did not uphold its end of the contract.

This position was refuted by both State Minister Joseph Harmon and acting Georgetown Mayor, Sherod Duncan, who both said the contract allows for suspension due to a frustration outside of the contracting parties.

The government ordering a suspension of the contract, in keeping with local government laws, seemingly qualifies as such a reasonable frustration. 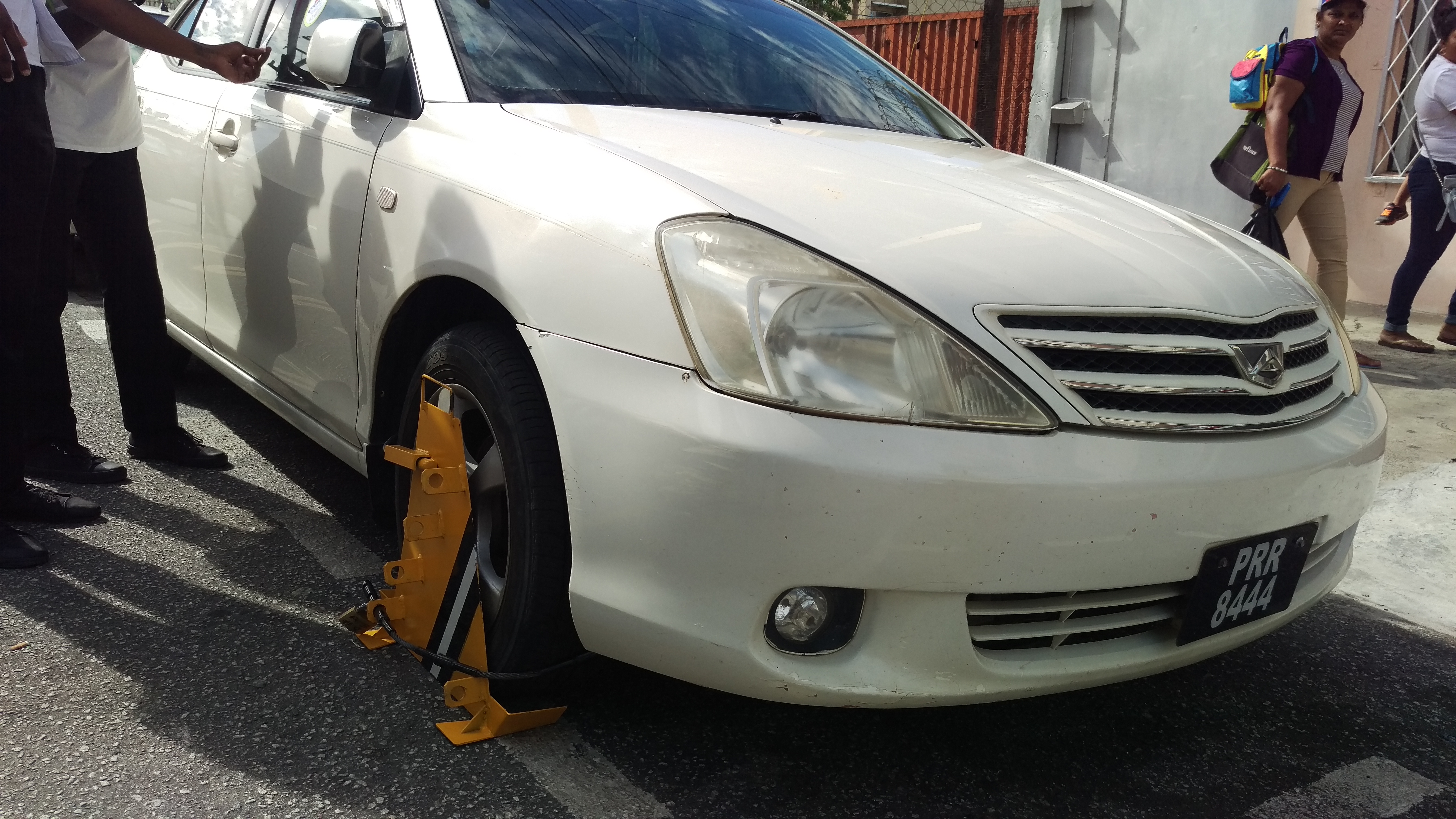 Another position from Minister Harmon was that a number of streets where parking meters were installed were actually under control of the central government and not the city administration.

One of those streets is the commercial Water Street, where a number of high-end businesses are located including National Hardware, Muneshwers, and two commercial banks.

Meanwhile, the MAPM through its facebook page started documenting the clamping around the capital city today, calling it bullying.

Following city council’s decision to hold off on suspending the parking meter regime on Monday, MAPM has issued a called for citizens to hold their councillors accountable for voting to stall approval of the suspension.

The MAPM said in a statement that the extraordinary statutory meeting seemed to be an “ambush” led by Town Clerk, Royston King, who is one of the vocal supporters of the parking meter regime.

“Hold these persons directly accountable for whatever disasters may ensue from the parking meter fiasco,” MAPM said.

Demerara Waves Online News observed a number of SCS staff clamping vehicles on Robb Street today, and explaining to motorists that despite central government’s ordered suspension, the order is yet to be considered at the level of city hall.

2017-03-21
Derwayne Wills
Previous: GECOM Chairman must not be an activist or associated with any political party- Granger
Next: Granger’s qualities of a GECOM Chairman can backfire on him- GTUC President