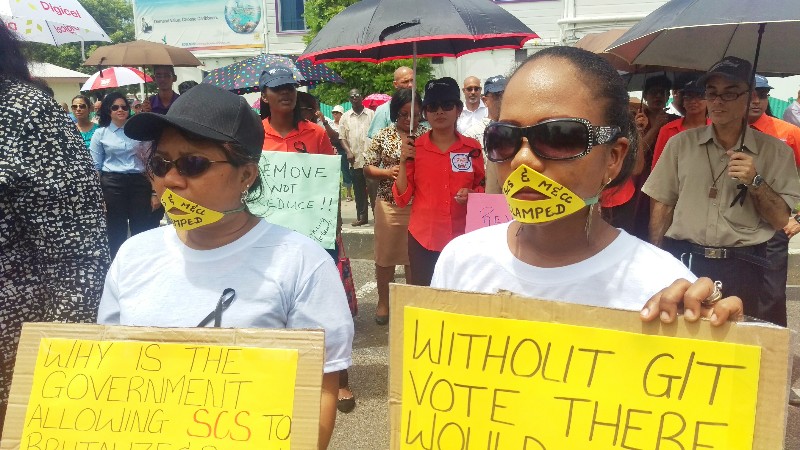 Hinds’s recommendation on the protest line against the parking meter regime organised by the Movement Against Parking Meters comes after a recent recommendation of the administration for City Council to review or have the contract quashed altogether.

The announcement by State Minster and Cabinet Secretary, Joseph Harmon, came after five weeks of protests and two ongoing court actions against the parking meter regime. The court actions are still being heard.

Although the recommendation has been made, it has not yet been brought to the attention of the City Council at a statutory meeting. Georgetown Mayor Patricia Chase Green is currently out of the jurisdiction on official business.

Meanwhile, Deputy Mayor Sherod Duncan is acting in the capacity of Mayor, until her March 24 return.

Asked about his optimism that the contract will be reviewed to public satisfaction or scrapped, Dr Hinds expressed some level of uncertainty, but assured his opinion that the one is one for central government.

“You can’t predict what politicians are going to do. They are a special breed,” Dr Hinds told Demerara Waves Online News, adding, “they work with a different kind of mindset.”

The long-standing WPA affiliate believes if the protests continue, it will force the government to take ultimate action.

Hinds went on to say the administration’s response has been unsatisfactory. “I don’t buy that people out here are PPP. They are patriots and citizens and their political affiliation should not matter,” the continued.

The activist said even though some people are not out on the protest line, there is a silent support for what is going on.

“I think a lot of people here feel disrespected. The way the Mayor behaved and with the counter protest and the lack of respect for people,” Hinds noted.

“Government is not in the business of saying ‘we are wrong,” the activist continued, “but if the protest continues, they will dig in and dig in, and I believe they are going to come to the table.”

According to Duncan, the Town Clerk noted that any recommendation to suspend the contract would see the ‘terror clause’ activated, which could see the city paying millions of dollars to Smart City Solutions for breach of contract.