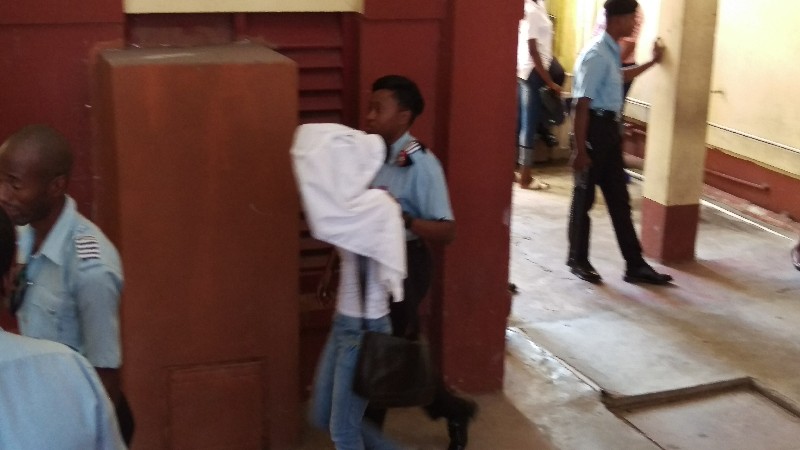 A veiled Tiffany Sultan escorted through the courts today.

Charlestown youth, Tiffany Sultan, was today, March 15, sentenced to two years and 11 months in prison by Chief Magistrate Ann McLennan, after she was charged some time ago with illegal possession of 106 grammes of cannabis for the purpose of trafficking.

The court found 23-year-old Sultan guilty, and sentenced her to prison along with $159,000 fine, owing to the street value of the cannabis at $500 per gramme.

Sultan’s trial concluded today after she was arrested earlier in January. Chief Magistrate McLennan, in her decision, said she was satisfied with the evidence that Sultan was, in fact, found in possession of the marijuana, since she was the sole occupant of the Broad Street, Charlestown house where the cannabis was found.

Chief Magistrate said she was further satisfied that Sultan had intentions of trafficking the narcotic, since a quantity of money was found under her bed, in $20, $100, and $500 bills.

Sultan was represented today by attorney-at-law Stanley Moore. Moore told the court since the beginning of the trial, Sultan had been blaming herself. Meanwhile, Moore said the police prosecution did not go after the ‘big sharks’ who are the operators for ‘small fries’ like Sultan.

It was believed that Sultan was selling the marijuana for a man identified as “Axe Man,” however, she denied knowing anyone by that alisa.

During Sultan’s testimony some time ago, she told the court she was assaulted by an officer at the police station where she was held for questioning. The court found today that the evidence of the officers against Sultan was admissible.

The court heard that on the day of the offense, Sultan was cooking when officers entered her home and began to search. Sultan was reportedly asked a series of questions, after which she pointed officer to the marijuana in her bedroom.

Some $200,000 was found in another bedroom, which the accused said the money belonged to her father. Sultan exited the courtroom today sobbing as her family were present in the court, including her father who testified some time ago on her behalf.