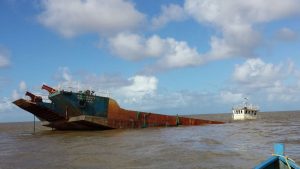 The wreckage of a vessel which sank last week off the Essequibo Coast reportedly laden with rice for Venezuela. (Stabroek News photo)

A Venezuela-flagged vessel  had been seen listing offshore Essequibo since earlier this month, but apparently it had not been located by Guyanese officials

Director General of the Maritime Administration, Claudette Rogers told Demerara Waves Online News that her entity was notified on March 9 that the MV Dona Marta was listing (leaning) and contact was made with the Guyana Defence Force (GDF) Coast Guard.

Sources said the Venezuelan crew members are all safe.

Based on preliminary information gleaned, the vessel did not report its arrival or departure from Guyanese waters , and only sounded a distress call when it was sinking.

All vessels entering and leaving Guyana’s waters are required to report to the Lighthouse.

Rogers stressed that the focus now is to establish the coordinates of the wreck, located off Walton Hall/ Devonshire Castle villages, and dispatch a notice to all mariners for safety reasons.

One of the rice exporters, Wazeer Hussain, told Demerara Waves Online News that more than one rice exporters’ cargo was aboard the MV Dona Marta. Hussein said he had about 100 tons of grain aboard the vessel. Hussain said he was told that Venezuelan officials are expected to visit the partly submerged vessel.

The MV Dona Marta was shipping rice from Guyana to Venezuela under a private arrangement, although the bilateral rice-fuel barter between the two countries was scrapped in 2015 at the height of a row over that Spanish-speaking neighbour’s claim to Essequibo and the Atlantic sea off that region.