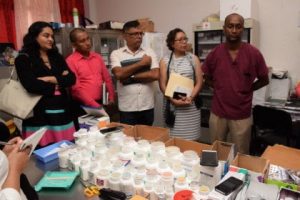 Surinamese citizens trekking to Guyana to access free medical services at the New Amsterdam Hospital in Berbice, is among the concerns that have been raised with the administration as it looks to address the reported drug shortages at that institution.

This was the disclosure made today (March 10, 2017) by Minister of State, Joseph Harmon, as he addressed the reports of drug shortages at the New Amsterdam Hospital with media operatives during a post Cabinet briefing at the Ministry of the Presidency (MotP).

“What I have found also in one of my outreach meeting that I went to, to Berbice, was that there was a complaint made by some of the regional officials (is) that we are having persons who are actually coming from Suriname and utilizing our medical facilities in Berbice, because the bulk of it (medical services) is free” according to Minster Harmon.

The Minister said the free health services being offered in Guyana has led to a steady flow of traffic from Suriname by persons travelling to neighbouring Berbice to utilize the Guyanese medical system for free. According to the Minister, the administration has since undertaken to have the anomaly properly documented “so that steps could be taken insofar as correcting that situation.”

On the matter of the reports of the drug shortage, Harmon disclosed that this situation was in fact discovered b y a parliamentary team that had visited the institution. The Minister of State was quick to point out however, that it is not a case of a general drug shortage but rather the shortages were related to specific supplies.

“A team from the National Assembly visited the New Amsterdam Hospital and discovered this, but this was something government was aware of and was taking steps to correct it…The shortage of drugs at hospitals across the country is a matter which is being dealt with by the Ministry of Public Health.”

He was adamant, the shortage was related to specific drugs which the Ministry of Public health has since taken steps to correct. “The drug shortage at new Amsterdam is something very specific , you may have a shortage of a particular type of drug, it is not a general shortage and therefore the Minister of Public Health is addressing that,” Harmon told media operatives.