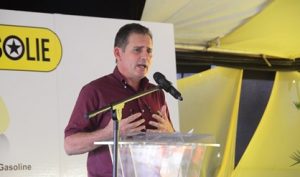 Suriname’ state oil company, Staatsolie, says it is not prepared to refine Guyana’s  light crude oil because the refinery in that former Dutch colony is built to process heavy oil, the De Ware Tijd newspaper reported on Monday.

In stark contrast to last week’s announcement by Minister of Natural Resources, Raphael Trotman that Suriname, and Trinidad and Tobago have offered to refine Guyana’s sweet light crude,  Managing Director of Staatsolie, Rudolf Elias said that company’s refinery has been built for heavy oil that Suriname currently produces.

“Even if Suriname does his own discoveries in its deep sea area, the type of oil that will be of the same light quality as in Guyana. It will also not be processed in our refinery,” Elias was quoted as saying by that daily newspaper.

He explained that in addition to the fact that the refinery cannot process Guyana’s oil, there is a logistical problem as it relates to the shallowness of Suriname’s coast. “Guyana will produce such large quantities that gigantic tankers needed three hundred thousand able to transport up to half a million barrels. Such large vessels cannot even moor to our shores, let alone the Suriname River sail to reach our refinery,” says the director. 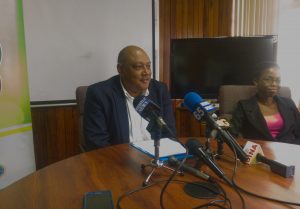 The newspaper further reported that Guyana’s fact that sediment washed down from the  Amazon Jungle makes riverain and coastal areas very shallow. Suriname’s sandbanks also extend to about 40 meters offshore. “It’s just impossible dredge the area properly to allow large oil tankers. Guyana suffers from the same problem that the shallow coastline makes it unprofitable to build a large refinery,” he said.

The Guyanese Minister of Natural Resources said last week that it would be unwise to build a US$2 billion refinery that would eventually be left idle for another 25 years.

Staatsolie reportedly processes up to 15,000 barrels of oil per day, leaving no room for oil from other countries.

Trinidad and Tobago’s former Energy Minister, Kevin Ramnarine has also virtually ruled out his country’s refinery, Petrotrin, processing large quantities of Guyana’s oil, amounting so far at more than 2 billion barrels. He said Petrotrin has been configured to refine heavy to medium crude.

“It is possible that some of it could be used as a diluent to dilute some of the heavier  crude in Trindad but I don’t think the refinery diet in Trinidad is what you all (Guyana). There could be scope for configuring the refinery to refine light crude but upgrading the refinery to do that will require money and Petrotrin is strapped for cash so I think the immediate best bet would be to refine that crude in the US (United States) which is what I think is what Exxon is going to do in the beginning,”  Ramnarine has told Demerara Waves Online News.

Guyana has commissioned a study to determine whether it would be feasible for Guyana to build an oil refinery.

Pedro Haas has been hired through the New Producers Group of the Royal Institute of International Affairs ‘Chatham House’ to help government determine whether an oil refinery should be built in Guyana. Haas is Director of Advisory Services at Hartree Partners LP,  a global merchant commodities firm specializing in energy and its associated industries.  The firm focuses on identifying value in the production, refinement, transportation and consumption of trade-able commodities and anticipating opportunities in the supply chain where they may be under or over-valued.