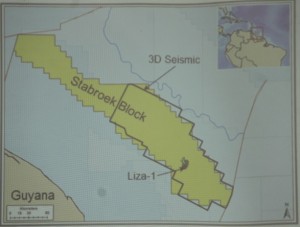 Trinidad and Tobago, and Suriname have offered to refine Guyana’s oil, although ExxonMobil reserves the right to take its portion elsewhere for processing, authorities said Thursday.

Minister of Natural Resources, Raphael Trotman said  Trinidad and Tobago’s oil refinery, which has a capacity to process 175,000 barrels per day, has been operating “below optimum” even with the importation of oil from Nigeria and elsewhere for blending, refining and export.

ExxonMobil plans to begin commercial oil production at a rate of 100,000 barrels per day from wells offshore Guyana around mid 2020.

Trotman said he was informed on Tuesday that Suriname’s refinery, which is also operating below capacity, is available to refine Guyana’s oil.

Minister Trotman said ExxonMobil might want to refine some of the oil and Guyana could decide if it wants to take its portion and refine it locally or in either of the sister-Caribbean Community (Caricom) countries. “Exxon may wish to do some of its own refining, but the Government of Guyana under the terms of the agreement, can also determine whether it wishes to receive its portion in oil and, therefore, may wish to use the available facilities nearby- either Suriname or Trinidad or, as I said, build one here, but we haven’t come to that decision as yet,” he said.

Guyana has commissioned a feasibility study to determine whether an oil refinery should be built here.