US DEA names Guyanese held in US$17 million cocaine haul 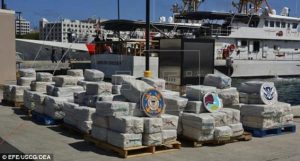 Four Guyanese, who were caught aboard a St. Vincent-registered fishing vessel with more than US$70 million worth of cocaine, are due to return to a United States Virgin Islands court on Wednesday for a detention hearing.

“Crew members typically serve as couriers to assist in loading and offloading of the contravand. Their purpose on the vessel is to perform that task,” said US Drug Enforcement Agency (DEA) Special Agent, Jeremy Latchman in court papers seen by Demerara Waves Online News.

The investigator added that the 185 bales of cocaine, each fetching a street value of US$17,500 per kilogramme in the US Virgin Islands, were found behind a false wooden bulkhead in the vicinity of the vessel’s hold. The total value of the cocaine is US$71,750,000

Latchman said Hoseain initially lied that he and he and his crew had been searching for a missing vessel and that Lady Michelle was registered in Guyana. The DEA agent said after St. Vincent authorities confirmed the nationality of the vessel, permission was obtained to board it in keeping with a bilateral agreement in the fight against drug trafficking.

The DEA agent related that the fishing vessel was found on a route usually used by drug traffickers who fetch South American cocaine to the Caribbean, United States and other countries.

“The vessel that was later identified as the Lady Michelle appeared to be dead-in-the-water and was also in water too deep to conduct normal fishing operations. The vessel was also located in a known drug trafficking route.

Demerara Waves Online News was told Tuesday by a local law enforcement agent that the vessel, Lady Michelle, last came to Guyana in 2013 and was not previously known to have been involved in drug trafficking.

2017-02-28
Denis Chabrol
Previous: Jagdeo to submit more names to Granger for GECOM Chairman
Next: Govt not about to get rid of CANU Head