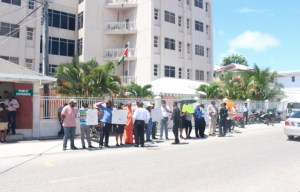 The small group of anti-vat protesters outside the headquarters of the Guyana Revenue Authority, Camp Street, Georgetown. (News Source photo)

Businessman Roshan Khan, on Tuesday (February 28) spearheaded a picketing exercise, in protest of the new Value Added Tax (VAT) regime imposed recently, by the coalition A Partnership for National Unity, Alliance for Change (APNU-AFC) Government, outside of the Guyana Revenue Authority’s (GRA) Camp Street Headquarters and called on the administration to immediately revert to the status quo that had prevailed.

“Take back the two per cent,” was the adamant plea of Khan, in reference to the reduction of  VAT by two per cent, down from 16 per cent which was charged previously on selected commodities and services.
Joined by a small group of placard bearing concerned citizens and members of civil society including the principal of at least one private school, the businessman told Demerara Waves the expanding of the items that attract the VAT, nullifies the two per cent reduction and is akin to giving with one hand and taking with the other.
Principal of the Saraswati Vidya Niketan (SVN), Swami Aksharananda —another of the picketers to speak to Demerara Waves on the protest line, also lamented the application of 14 per cent VAT on Education saying “it is going to have a severe impact on us.”
He predicts that that application of 14 per cent VAT on Private Education will in fact lead to a higher school drop-out rates, since there is a significant number of students in the private school system—including the SVN—which caters to children that are in fact from poor families who are, “barely managing to scrape school fees as they are right now.”
He said, applying a 14 per cent increase on top of that will mean “the burden is going to increase on them immensely.”
The RK Security Company’s Chief Executive Officer (CEO) told Demerara Waves, he was somewhat disappointed by the smaller than expected turn-out but was quick to indicate that many persons particularly teachers and school representatives had expressed some form of consternation about attending, in light of reports that the President would shortly announce the removal of the tax on private education fees.
Khan told Demerara Waves, he had received numerous calls from persons who expressed and unwillingness for fear of some form of adverse retaliation on the part of government—such as maintaining the tax on private school fees, as reported by sections of the local media.
On the matter of the new tax regime Khan said, “I think it is most harsh and difficult on particularly working class…Everyone suffering but everything eventually falls under the working class (and) the poor people in society.”
He said as an employer, “I have workers by the hundreds and I feel the pain, I know their difficulties…As I travel through the country I hear, the cry of the people.”
Slamming the current crop of elected leaders in government for failing to hold consultations at the grass root level and not just with the representative’s umbrella bodies such as the local Private Sector Commission and Trade Union Bodies, the RK boss said the goodwill promised by the government is not being translated to genuine action.
He dismissed assertions on the part of  the government that there has been consultation with those representative and said those responsible should instead “talk to the people…don’t worry with those big shots, the big society and the private sector and all the big labour leaders, their turf is sweet.”
Stopping short of labeling the ‘big shots’ a part of the problem, Khan told Demerara Waves “…all I know is that VAT has been charged drastically.”
He was quick to dismiss too any assertions that the band of picketers were politically motivated in anyway saying, “I don’t want this to be political because I am not anti-government, I am pro-Guyana, pro-people and I am concerned.”
According to Khan, “people who didn’t even vote for them (APNU-AFC) bless them and said we have a change and the pronouncements, before the election and after the election was very beautiful but (now) all you are hearing are taxes, taxes, taxes.”
He chastised as ludicrous the application of “VAT on education, VAT on salt, sugar, water, VAT on medicines, a Panadol…”
Advancing demands, Khan called on Government to immediately repeal the applications as announced by Minister of Finance during his Budget 2017 presentation which has since implemented. “Take back you two per cent because is like you giving with you with one hand to the people, oh an election fulfilled, two per cent and then they charging you 14 per cent on everything…they giving you with the right hand and kicking you with their right foot, that is how I see it.”
While some were hesitant to speak on record, some of the picketers could be heard in discussion over the application of VAT on services such as school fees and its multiplier effect on their lives.
One woman told Demerara Waves, her child being in a Private School, is not as a result of being wealthy of well to do. She said it was rather a complete lack of confidence in the Public School System , a sentiment that found agreement with most within earshot.
She scoffed at remarks by government officials that suggested those in the private system were in fact the ones that can afford to pay the VAT.
The RK Security CEO who was among the principal organizers of the protest has vowed to maintain their action until making headway. Khan said the group will also stand in solidarity with like-minded groupings.
According to Khan, GRA was targeted since it was the revenue collection agency for government and the group was looking to make a bold statement in voicing their worries with the new VAT regime.