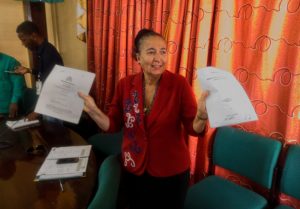 Opposition Leader, Bharrat Jagdeo on Monday accused the People’s National Congress Reform (PNCR)- the single largest party in the governing coalition- of sticking with the controversial parking meter deal to fund its operations.

This contract was designed to finance the PNC for the  next twenty years because a significant part of the proceeds will go to Congress Place and so they don’t care about the public outcry,” Jagdeo said.

The deal is 80-20 in favour of Smart City Solutions, a company that was registered last year weeks before signing a deal with its minority partner, the Mayor and City Council of Georgetown.

Efforts to contact PNCR General Secretary, Oscar Clarke for a reaction were not immediately successful. The Council is majority controlled by the PNCR-dominated A Partnership for National Unity (APNU).

The AFC earlier this month called for the contract to be suspended, saying the handling of that project from its inception to its current stage lacked sufficient prior public consultation, there was an absence of transparency, competitive, and seeming lack of proper planning with regard to exemptions and the pricing and penalty structures,

Sections of the commercial Georgetown and private individuals have been protesting for more than one month now, charging that the agreement and parking meter bylaws virtually cede sovereignty to the company.

Except for minor fee adjustment for all-day parking, little has changed. City Hall says it badly needs the funds to help rehabilitate roads, drainage and other facilities.

2017-02-27
Denis Chabrol
Previous: Jagdeo shies away from stating interest in third term but lists qualities of candidate
Next: Guyana’s telecoms sector to be fully liberalised before mid-year–Telecoms Minister