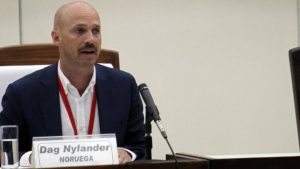 UNITED NATIONS — U.N. Secretary-General Antonio Guterres on Monday appointed a Norwegian diplomat who dealt with the Colombian peace process to try to settle the longstanding border controversy between Venezuela and Guyana by the end of the year, the Associated Press reported.

Dujarric said on Dec. 16 that then-Secretary-General Ban Ki-moon and Guterres, who succeeded him on Jan. 1, had agreed that the U.N. chief’s use of his “good offices” to resolve the dispute, which started in 1990, would continue for a final year until the end of 2017.

If Guterres concludes that no significant progress has been made by that time, Dujarric said the secretary-general will refer the issue to the International Court of Justice for settlement — unless the governments of Guyana and Venezuela jointly request him not to do so.

The dispute has its origins in the “Arbitral Award of 1899,” a decision on the frontier between Venezuela and what is now Guyana.

Venezuela contends the decision is null and void and claims about 40 percent of Guyana’s territory, which is rich with gold, diamonds, timber and other natural resources. Guyana, which is much smaller, rejects the claim and is pressing the U.N. to take the case to the International Court of Justice.

Dujarric said Nylander “will actively engage with the governments of Guyana and Venezuela with a view to exploring and proposing options for a solution to the border controversy between the two countries.”

Trained as a lawyer, Nylander was Norway’s special envoy to the Colombia peace process from 2012-2016 and headed the country’s mission in the South American nation from 2006-2008. He previously served at Norway’s U.N. Mission in New York and its embassy in Buenos Aires.