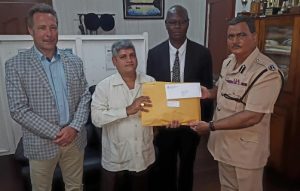 On Wednesday, February 22, 2017,Junior Finance Minister Jaipaul Sharma met with Acting Commissioner of Police David Ramnarine at his Office at Eve Leary to hand over the Final Reports of the Forensic Audits of the One Laptop per Family, E-Government Project, National Frequency Management Unit, Guyana Gold Board and Georgetown Public Hospital Corporation.
The Ministry of Finance says the decision to have these documents handed over to the Police Commissioner for investigation was made by Cabinet.
Present at the handing over were: Hon. Jaipaul Sharma-Minister within the Ministry of Finance, Mr. David Ramnarine – Acting Commissioner of Police and Mr. Sydney James – Assistant Commissioner of Police and Head of the Special Organized Crime Unit (SOCU).

The final report from the Financial Audit into the One Laptop Per Family (OLPF) project, launched by the previous Government in 2011, has found that the financial systems and internal controls governing the project were generally weak, the Government Information Agency (GINA) reported.

The report, among others was handed over by Minister within the Ministry of Finance, Jaipaul Sharma to Assistant Commissioner of Police, David Ramnarine on Wednesday.

The audit was conducted by Ram & McRae, Chartered Accountants. The report provides an analysis and evaluation of the OLPF project and contains findings and information which auditors believed should be brought to the Government’s attention and recommendations designed to improve the systems of the project and similar initiatives by the Government of Guyana.

Since the project did not have a Board of Directors, the underlying principles of corporate governance should have been fulfilled by management. There is no evidence that this was done, the report stated.

The OLPF’s mission statement defined a clear obligation to provide 10 hours of training to all laptop recipients. However, the project’s Manager, Margo Boyce decided to cease the training aspect of the project during the last quarter of 2013. The report said that in a rough estimate some 14,138 laptops were distributed without the requisite training.

The report further stated that while the lower level positions were advertised, political considerations may have influenced the appointment of the more senior staff, including two sons of a former Government Member of Parliament; while the OLPF project was grossly over staffed. The project had as many as 16 departments and an average of 133 employees during the years 2012 to 2014. Additionally, the Project Manager was unable to justify the number of departments and employees.

Upon examination by the auditors, it was revealed that a number of departments, including accounts, warehouse, documentation and registry, did not perform duties in accordance with the Standard Operating Procedure (SOPs).

During 2012, management discovered that 103 laptops were missing. Following investigations by the police, the services of seven employees were terminated by the Office of the President on February 22, 2013.  The missing laptops which cost $5,912,200 were not recovered. On August 5, 2015 the auditors requested and observed a 100% physical inventory count and subsequently preformed a reconciliation based on the documents provided.

Procedures revealed that management was unable to account for an additional 1,875 laptops costing $109,168,913. They believe that this matter should be referred to the police for a full investigation. The 3,158 laptops in stock, costing $191,079,058 are all damaged. They were unable to determine whether these are beyond repair. It is likely therefore that of the total number of laptops acquired by purchase or grant of 55,145, some 5,136 were either stolen or are defective. In dollar terms, the actual loss to the Government is $306,160,171, according to the report.

According to the grant agreement signed between the Government of Guyana and Aerospace Science & Industry Shenzhen Company Ltd (China) on September 15, 2015, 9,609 laptops were to be provided by China at a total cost of ¥50,000,000 or $1,631,000,000. These laptops were earmarked for distribution to educators, students, institutions of learning and community based organisations.

The audit also revealed that the project did not maintain any proper accounting system and the only accounting done was by way of instructions to the NFMU to approve invoices for payment. There was no accounting for transactions executed on behalf of the project nor was there any reconciliation of the records of the OLPF and the National Frequency Management Unit (NFMU), among other discrepancies, the report stated.

The audit was among several commissioned by the Coalition Government upon taking office to verify suspected financial administrative irregularities by the previous administration.

A decision was made by Cabinet to have these reports handed over to the Guyana Police Force (GPF) for investigations.