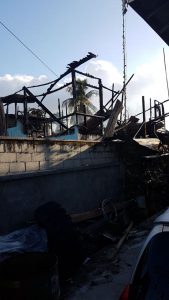 The remains of the house where DJ Magnum lived.

Fire Chief Marlon Gentle said investigators suspect that the fire was the work of arsonists. “Based on the evidence and information, it is an act of arson,” he told Demerara Waves Online News.

The fire service received a report of the fire at about 11:45 PM, Gentle said.

Sources said investigators were told that two persons were seen running away from the building and fleeing in a waiting taxi. It is believed that the fire stemmed from a domestic dispute involving two females, according to other sources.

At the time of the fire, DJ Magnum was not at home. West Demerara Divisional Police Commander, Assistant Commissioner Leslie James said the man reported that he left his home and shortly after he received a call from a neighbour that his house was on fire.

Fire fighters from the Guyana Sugar Corporation and the nearby La Grange Fire Station responded and prevented the fire from spreading to nearby buildings.

2017-02-20
Denis Chabrol
Previous: Private sector calls for dialogue as rift with govt deepens
Next: No lessons are learned