Parking meter contract can be revoked if conditions are right – MAPM 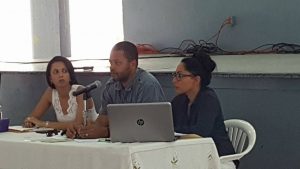 Lawyers associated with the Movement Against Parking Meters (MAPM) said there are legal and other grounds for the deal to be revoked, and different opinions have emerged over whether reactivation of paid parking on Monday will amount to contempt of court.

Speaking at a public consultation at the St. Stanislaus College, Brickdam on Saturday, Attorney-at-Law Nadia Sagar said the contract between City Hall officials and Smart City Solutions Inc. contains clauses that could facilitate a revocation. “I think we could explore the force majeure (occurrences beyond the reasonable control of a party) clause contained in the contract. It is something worth pursuing. It talks about events beyond the reasonable control of SCS that delays, interrupts or limits the performance of SCS’ obligation and they include civil commotion, riot or public disorder or an injunction issued  by a government authority,” she said when asked whether there was room for revocation without considerable financial burden to the City and its residents.

City Mayor, Patricia Chase-Green backed down from a previous public commitment that she would have attended the MAPM-organised public consultation whether or not she was invited. MAPM also did not take up an earlier opportunity to meet with the Mayor, Town Clerk Royston King and other officials at the Council’s Chamber earlier this week.

Sagar was careful to say that she was not advocating unrest but noted that the parties could scrap the deal if the conditions do not exist for the parking meter system to be run effectively. “There lies one possible solution so perhaps we need some- and I hate to say this but I am not inciting publicly- but I think we need to continue protest and to starve the meters as long as we can,” she said. 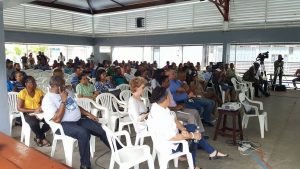 Attorney-at-Law, Pauline Chase added that the contract is unenforceable because the Council has not seen the contract. She is hopeful that Guyana’s courts would favour anyone challenging the contract. “It would be hard-pressed to beat us in our own courts. I would be embarrassed if they do so and I don’t think they can so the contract can be rescinded quite easily,” she said.

Sagar noted that SCS was registered in Guyana one week before entering into the contract with City Hall, raising serious questions about the claim by municipal officials that due diligence had been conducted on the company. “It (the contract) reeks of corruption and I am saying that we need to approach this with a completely different mindset. This was a corrupt act,” she said.

Deputy Mayor, Sherod Duncan said a mere announcement was made in May, 2015 that City Hall had been on the verge of signing a parking meter contract in a week’s time and two weeks later the elected body had been informed that the deal had been signed and the project had been moving forward.  He restated that none of the persons associated with SCS has any experiencing with rolling out parking meters in any other country.

With regard to two court actions against the parking meter system, Attorney-at-Law, Pauline Chase said the orders nisi amount to a stay and “any act contrary to that will be in contempt or very contemptuous. “I rather suspect that should Smart City Solutions take that step on Monday you will see an application being made to the court for contempt,” she said.

SCS and M&CC have announced that they would be resuming metered parking from Monday, February 20, 2017. Contrary to a previous announcement, the 50 percent reduction in rates would apply only to those purchasing eight hours of parking time. All other durations would remain at a minimum of GYD$50 dollars for  15 minutes. Motorists would be allowed to transfer their parking times to any area of the parking zone instead of one parking spot. They would now be required to input their vehicle’s parking license number instead of the parking lot number.

Attorney-at-Law Chase said the parking meter bylaws, which were illegally signed by Minister of Communities Ronald Bulkan, permits a foreign company enforcing the traffic law in Guyana instead of the police force.  She said the bylaws provide for SCS to seize and sell vehicles at an auction without any recourse to the court, amounting to a violation of property rights without due process. “What they are attempting to do is to remove the whole court process from this parking meter system,” she said. Chase noted that neither SCS nor its wardens bear any responsibility for damage to vehicles or liable to any offence while carrying out his or her duty.

MAPM has been holding weekly protests on Regent Street outside City Hall.