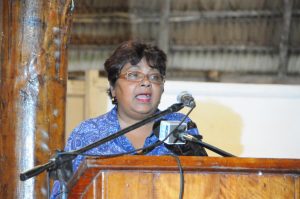 Ms. Nathoo, formerly of Port Mourant, Corentyne, died on Wednesday, February 16, 2017 at the Georgetown Public Hospital Corporation after a brief period as an in-patient, the Ministry of Education announced in a statement.

At the time of her demise she was Guyana`s serving Secretary General to UNESCO, a position which she held from 2008.

Ms. Nathoo, an alumnus of Bishop High School, started her working career with the Guyana National Co-operative Bank (GNCB), Port Mourant Branch. She subsequently proceed on a scholarship at the People`s Friendship University, Moscow where she read for, and obtained, a Master of Law degree, specializing in International Law.

Upon her return home, in 1985, she resumed  at the Co-op Bank and subsequently when on to serve at the National Bank of Industry and Commerce, which was the successor to the Co-op Bank. Ms. Nathoo also had successful stints at the CARICOM Rice Mill, the Guyana Manufacturers` and Services Association, the National Parks Commission and finally as Secretary General to UNESCO for nine consecutive years.

Left to mourn are her two children, Judith and Roddy, her mother, two sisters and a brother in addition to numerous relatives and friends.

The Minister of Education and the Ministry of Education, at large, regret the passing of one of its most faithful servants and extents its condolences to her family, relatives and friends.

2017-02-17
Denis Chabrol
Previous: “No exclusive parking in the City” – Mayor Chase-Green
Next: City Council moves ahead with parking meters despite pending Court orders