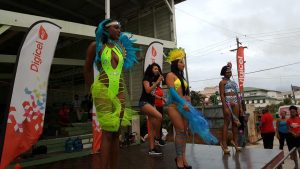 Digicel (Guyana) will not be on this year’s Mashramani costume and float parade, but is instead throwing its assistance behind several special needs organisations.

At the same time, the phone company is providing freely available costumes  from the ‘Trinity’ and  ‘Dynamic’ Bands once they are Digicel subscribers and have downloaded and are using MyDigicel app.

After the display of the costumes at the Digicel ‘Mash Fit’ at the Bourda Cricket Ground on Thursday,  Communications Manager, Vidya Brijlall-Sanichara told Demerara Waves Online News that the phone provider decided not to participate in the float parade this year.

“This year, we are trying to concentrate our efforts on community activities. We have been participating for the past nine years and we were in the recently concluded 50th Jubilee which was our biggest budget, biggest one yet so this year we are taking stock and there are plans to be on the road next year,” she said. 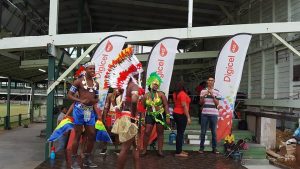 Brijlall-Sanichara said, however, that Digicel decided to hold its Mash Fit to help promote healthy lifestyles along with bands that will be one the road. “Persons want to be on the road and Digicel is not going to be on the road this year so we thought would be a good opportunity. Not everybody will get a costume but at least a few persons would,” she said.

Digicel’s 10th anniversary included 10 activities in 10 days to 10 special needs schools and orphanages throughout Guyana. They benefited from much needed appliances, school supplies, school shoes, food hampers and other items.

Digicel says it remains committed to their Corporate Social Responsibility and their focus on charity and special needs remains at the top of their list. Special Needs intervention is central to their mandate throughout the Caribbean and Central America and they are committed to enhancing the welfare of children with special needs across those markets.