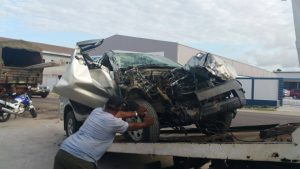 The driver of a pick-up was Thursday afternoon seriously injured after the vehicle he was driving slammed into a ‘bush truck’ at Montrose, East Coast Demerara.

The yet to be identified injured man was extracted from the mangled pick-up and rushed to the Georgetown Public Hospital for emergency treatment.

The accident occurred shortly  on the Montrose Public Road in the vicinity of Massy’s and Caroline’s Clothing Store.

Truck driver, Terrence Crawford said he was heading eastward to La Bonne Intention (LBI) to deliver materials for Guyana Water Incorporated (GWI) when he tried to avoid colliding with the pick-up that that was overtaking two other vehicles. 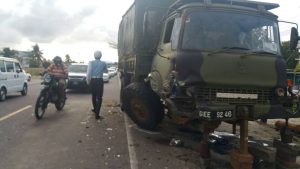 my lane to come down to avoid the accident but I couldn’t avoid it because the pick up was coming at a rate and come straight into the truck and lash out front deferential and there is where I end up,” he told reporters at the scene.