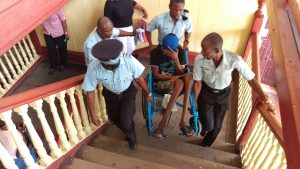 On the first matter, George is accused of murdering restaurant cashier, Debra Blackman, aged 48, of Tucville during a robbery at the Durban Street Chinese restaurant in 2014, where she worked.

George today told the court he sustained his gunshot injury in Suriname, which caused damage to his spine, taking away mobility in his legs.

In November, 2014, police had released surveillance footage of the suspect committing the act but was unable to apprehend him. Police received intelligence that George was at his Better Hope home, and went in to arrest him a few days ago.

The footage showed a young man, dressed in a grey t-shirt, dark coloured pants and a red cap, entering the restaurant and standing by the counter. He was the shooter. He was also accompanied by two others.

The shooter remained standing at the counter and was recorded gazing around the restaurant. His face remained visible throughout the recording.

The man then left the restaurant and mounted a CG motor cycle which sped off.

Police had been using the image from the video footage of the suspect since 2014 to capture him. It is believed he fled to Suriname.

On the second matter, George was accused of attempting to murder former magistrate, Mohamed Faizal Azeez, who is still bed-ridden. Azeez, of Kitty, was held in 2015 at gun point for cash in Eccles, East Bank Demerara.

George’s attorney, Melville Duke, represented him only for the Durban Street murder charge. Duke argued there were no eyewitnesses to the event, except for the video, which he said was a poor production.

George will be remanded until February 16, since prosecution denied bail based on the fact he had another pending matter for robbery at the Sparendaam Magistrates’ Court.