Legal action is being planned  against the parking meters by several persons and groups to scrap the deal between City Hall and Smart City Solutions (SCS), even if government intervenes and lowers the rate, according to representatives of the Movement Against Parking Meters (MAPM). 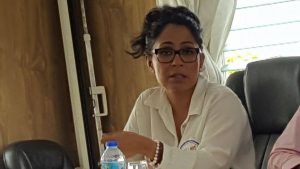 Attorney-at-Law, Nadia Sagar, who is part of MAPM, said she was aware of legal moves to take City Hall and SCS to the High Court. “Legal action is going to be taken. Things don’t happen overnight. There are several entities that are pursuing action through different attorneys,” she said.

Although the Guyana government appeared set to intervene by asking City Hall and SCS to reduce the fees, MAPM said that would not be sufficient because of the absence of competitive bidding, consultation, due diligence on the company and social impact assessment. “What we support is a parking system and metering is just part of a parking system and what we have is a parking meter arrangement that was illegally done,” said former President of the Georgetown Chamber of Commerce and Industry (GCCI), Komal Ramnauth.

Sagar said MAPM would not be a party to the court actions being prepared by the private entities. She could not say how soon court papers would be filed.  She noted that the Municipal and District Councils Act provide for bylaws to be submitted to the Minister for approval and at least 14 days before request for approval, a notice of intention should be published. “We are not aware that any of that has been done so there is no evidence that the procedure required to make these bylaws legally enforceable were ever adhered to,” she said.

MAPM officials called on government to revoke the agreement between the Mayor ad City Council and SCS on the grounds that there was no open competitive bidding process and the fact that the bylaws provide for SCS to eventually sell vehicles that have been towed away and impounded if the motorist or owner does not pay all the booting, towing and storage fees within 90 days.

“We are advocating that instead of the City breaking the contract, starve the green monsters and if you don’t support it SCS will have to pull out on their own because they will not be able to financially upkeep themselves. Whatever the terms are, whatever the penalty is if the City don’t break the contract then, then they will not have to pay,” Ramnauth told a news conference organised by MAPM and held at the GCCI’s headquarters. 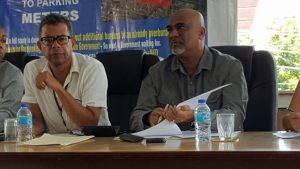 Anti-parking meter organisers claimed that motorists are losing an additional GYD$36 on every card, in addition to the 14 percent Value Added Tax.

They pointed to a review by the Ministry of Finance that had found that the original contract had contained sufficient grounds for it to be revoked subject to legal implications. The review cited the need for  feasibility study that includes analyses of demand, socio-economic cost-benefit and risks as well as technological options.

The Government of Guyana had, prior to an amendment of the contract to provide for a minimum GYD$50 per 15 minutes,  labelled the rates outlandish and that there was no available background of the company.

MAPM said SCS representatives were clamping/booting vehicles indiscriminately because they are being paid a commission.

The Private Sector Commission (PSC) says the activation of parking meters in the City has caused a massive slowdown in the wholesale and retail sector of Georgetown. However, City Mayor Patricia Chase-Green has said that the feedback she has been receiving is that businesses are happy with the impact of the parking meters.

City Hall says it is cash-strapped and the 20 percent gross revenue from parking and associated fees will go a long way to funding the rehabilitation and maintenance of Georgetown.