Guyana, Suriname to set aside protected areas at sea 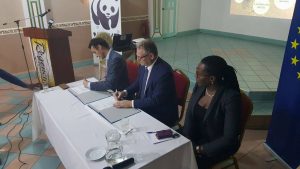 Guyana and Suriname are preparing the groundwork to set aside 10 percent of their Exclusive Economic Zones (EEZ)  as marine protected areas by 2020 in keeping with a project between World Wildlife Fund (WWF) and the European Union (EU).

The EU has alllocated 1.25 million Euros for the project to be executed by WWF, Protected Areas Commission of Guyana and the Nature Conservation Service of the Suriname government.

The Aichi Biodiversity Targets of the United Nations Convention on Biological Diversity requires signatory countries to set aside 10 percent of their marine coastal systems as protected areas.

“These outcomes are to designate ten percent of Guyana Suriname’s coastal resources as marine protected areas and to analyse the information gathered to develop a framework to better manage these areas,” Annalise Bayney of Guyana’s Protected Areas Commission told a ceremony to launch the “Promoting Integrated and Participatory Ocean Governance in Guyana and Suriname: The Eastern Gate to the Caribbean.”

Highlighting the importance of the marine environment, Representative of WWF Guianas, Laurens Gomes told the project launch and signing ceremony that the oceans capture more carbon emissions than all of the world’s forests and the fisheries sector is a “very critical food source” for many communities.  Gomes said experts would tap into the knowledge and experience of people who are already using the oceans.

“We would be placing people first in terms of people who are knowledgeable about the ocean because they may be researching but also because they may be active users of the ocean and thus are gathering important knowledge,” he said, adding that experts could address over-fishing, poverty alleviation and the exploration and exploitation of oil and gas.

The project envisages three-dimensional modeling of the coasts of the Guianas to obtain comprehensive and visually appealing data to influence decision-makers.  “Overall, this project will fill critical information gaps by developing  comprehensive and visually appealing spatial data (a  Geographical Information Systems atlas and a 3-D ocean maps) collated through participator processes, enabling informed decision-making regarding marine protection and management,” the EU said in a statement.